WASHINGTON (CNN) -- Defense Secretary Robert Gates said that the United States could defend itself should North Korea launch a missile toward Hawaii and that U.S. officials are carefully monitoring the reclusive nation's military. 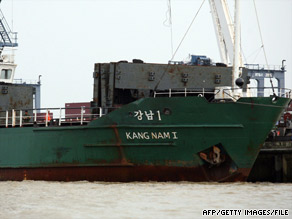 This North Korean ship is known for having carried "proliferation materials," a senior U.S. official says.

With missile interceptors and radar equipment deployed in and near Hawaii, "we are in a good position should it become necessary to protect American territory," Gates said Thursday.

Meanwhile, the U.S. military is tracking a North Korean ship in the Pacific that is believed to be carrying illicit weapons or technology, a senior U.S. official said Thursday.

While the United States does not know what is on the ship, the Kang Nam is a "repeat offender," known for having carried "proliferation materials," one senior defense official said.

Watch what U.S. forces are monitoring »

Adm. Michael Mullen, chairman of the Joint Chiefs of Staff, said Thursday that the United States would not forcibly board a North Korean ship but, in accordance with a recent U.N. resolution, would request permission to search the ship or press any port the ship docks in to inspect it for illegal materials.

The U.N. Security Council passed a resolution June 12 calling on all states to inspect vessels suspected of containing contraband. If a ship refuses, it is to proceed to the closest port for a mandatory inspection.

Tension has been rising with North Korea, which in May conducted a nuclear test, fired test rockets and threatened U.S. and South Korean ships near its territorial waters.

The Current TV journalists were apprehended near the country's border with China and accused of plotting a smear campaign against North Korea. Lee and Ling were sentenced to 12 years in a labor camp.