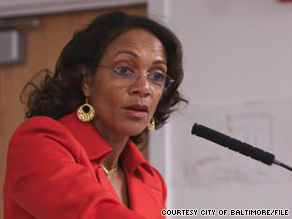 Baltimore Mayor Sheila Dixon, shown in April, once worked in a city jobs program as a youth.

(CNN) -- Some of the stimulus money from the U.S. government is going to programs that help young adults find jobs.

In Baltimore, Maryland, the city wants to put more than 7,000 to work, mostly in local government jobs. It will use more than $6 million from the federal government and sponsorship money, according to WBAL-TV in Baltimore.

"I worked at a camp, and then in high school, I was able to continue to work in the program," she said. Read the full report on WBAL

In Palm Beach Gardens, Florida, Kahtoya Wesley, 20, has had difficulty finding a job, but she has a better chance of finding work now because she has joined the Summer Youth Employment Program, according to WPBF-TV in West Palm Beach.

So far 200 people have landed jobs through the program, an initiative of the Workforce Alliance of Palm Beach County, WPBF reported. The organization is using $3 million of stimulus money to fund the positions the young adults find, the station said. iReport.com: Share your job hunt story

The group also prepares the job seekers for interviews and provides seminars in how to deal with work-life situations.

"I got fired like five times. It was bad," John Hill told WPBF. He chose a seminar on working better with a supervisor.

"Because I usually don't," he told the station. Read the full report on WPBF

The state of Arkansas is using federal money to fund jobs for at-risk students in Springdale, according to KHBS-TV in Fort Smith, Arkansas.

The town's youth center hired five teens to work in clerical and maintenance positions, KHBS reported. David Cook told the station he has had trouble motivating himself to go to school. The summer job was helping him with a shift on focus.

"It gives me a sense of responsibility of showing up on time, working on a schedule and with other people," he told KHBS. Read the full report on KHBS

Even before a new FedEx shipping center brings hundreds of jobs to Troutdale, Oregon, it is helping with employment through road construction jobs, according to KPTV-TV in Portland.

The new hub, which is expected to be completed in July 2010, will bring more than 1,000 additional cars to the area, so the Oregon Department of Transportation called for two additional lanes at a nearby major intersection, KPTV reported.

FedEx is expected to employ 650 workers at the facility once it opens, according to KPTV.

Oregon's unemployment rate was a record 12.4 percent in May. Read the full report on KPTV

South: No job? Create your own

He was once a senior loan officer who had been laid off and was looking every day for a job anywhere there might be an opportunity.

When he couldn't find the right chance, he created his own.

Kenneth Hodge is now a small business owner, the founder of SFG Records.

Six recording artists are featured on his Web site, and Hodge told the West Palm Beach station that he has already hired seven employees. Read the full report on WPBF

Federal stimulus money indirectly helped an air conditioning company bring 110 workers back to its plant in Marshalltown, Iowa, according to KCCI-TV in Des Moines.

The town's economic development director told KCCI that Lennox was able to hire back the workers because of increased demand.

"There's money from the federal level from tax rebates, and there's usually always money on the other side from the electric company helping out with tax rebates and most people are saying 'Yes, I want to do that,' " Joel Akason told the station.

Lennox is being cautious in its hiring, Akason told KCCI. Most of the positions are temporary, but 45 are permanent, the station reported. Read the full report on KCCI

All About Job Searching • Unemployment Rate