Iranian-Americans suffer a jumble of emotions

(CNN) -- In the pre-dawn darkness Saturday, long after her parents and brother were asleep, Atefeh Yazdi lay in bed cradling the house phone and her cell phone in her hands. 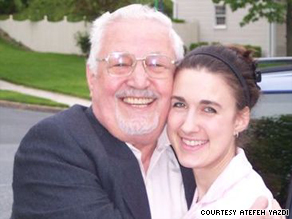 Atefeh Yazdi visits with her grandfather, Dr. Ebrahim Yazdi, during his trip to America last year.

The only light was from a television tuned to the latest news from Iran, and her laptop displaying her Facebook page in hope of any updates on what was happening halfway around the world.

"I kind of felt I was more there when I couldn't see the rest of the room, just the TV and the Facebook," the 28-year-old Iranian-American told CNN by telephone from her home in Mechanicsburg, Pennsylvania.

Repeated calls to relatives in Tehran only got the "annoying" Farsi-language error message. She recounted the thoughts running through her brain all night: "Are they going to really shoot people? What's going to happen? Is this going to turn into massive killing and violence?"

In Houston, Texas, Reza Soltani said the anxiety of waiting and wondering was like endless pacing at a hospital during a loved one's operation.

'From the Streets of Iran'

"It feels like the operation started last week and it hasn't ended," Soltani, 28, told CNN by telephone. "I'm worried. I'm hoping it will be good but I'm worried it will get very ugly."

The jumble of emotions -- fear, hope, anxiety, frustration -- were reality for millions of Iranian-Americans trying to find out if Iranian authorities would crush protests over last week's election.

President Mahmoud Ahmadinejad was declared the overwhelming victor in voting that opposition groups called rigged. No independent monitors were permitted for the election.

Thousands of protesters took to the streets Saturday, even though the demonstrations were banned and police confronted them with clubs, tear gas and water cannons.

The uncertainty and unrest strikes close to home for Yazdi, whose grandfather -- a longtime politician in Iran -- was arrested from his hospital bed this week. He's been returned to the hospital, she said, but she doesn't know if he'll be arrested again or what will happen to other relatives.

"It's very exhausting," Yazdi said. "I have this feeling I want to be there. I want to book the next flight. I want to be with the people. I don't care about the risks involved."

Her parents, who left Iran in the 1970s before the Islamic Revolution, say such talk is foolish, she said. They are as worried as she is, but fear returning now would bring too much risk.

"There's a generation gap, a culture gap," she explained. It runs deep, defining her life as an American-born citizen of both Iran and the United States, who refers to Iranians as "my people."

Soltani also mentioned the generation gap among Iranian-Americans, but he described it as more political. His parents' generation lost everything in the revolution, and will only consider returning when the revolutionary regime has been toppled, he said.

Older Iranian-Americans in the United States "actually boycotted the election, saying if you vote you're just legitimizing the government," Soltani said.

"We sacrificed everything for you guys, and now you're going to the other team," is how Soltani characterized their attitude.

"They think the system needs to go completely," he said. "All they care is for the system to collapse. They think if the system collapses, they're going to be able to go back."

No matter what happens, Soltani and Yazdi said, Iran is changed forever by this week's events.

"I believe that anything that comes out of it will be positive," Soltani said. "Even if they fail now, the people know if they get in the streets in millions, they're not going to be able to stop them."