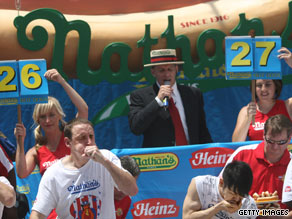 For the third straight year, Chestnut beat out his main rival, Takeru Kobayashi. The two lived up to their ravenous reputations. They made quick work of the 17 other eaters, and set personal best scores: Chestnut ate 68 dogs to Kobayashi's 64.5.

The event lasts 10 minutes and the two were keeping pace with each other until the last minute where Chestnut pulled away.

"I've been practicing hard," said Chestnut in an interview with ESPN after the contest. "After the second minute, I knew that my body was cooperating."

Chestnut and Kobayashi are considered the game's best and have different techniques to eating. While Kobayashi has a smooth, effortless approach, Chestnut muscles them down. Late in the competition Chestnut's face turns red and contorts as he drools.

He's got the competition down to a science: grabbing two hot dogs, forcing them into his mouth and taking a minimal number of chews as he gulps them down his throat. He then dips the buns in water and lets them slide right down.

Prior to the contest, Chestnut felt confident, saying he would set a new record.

"I'm usually pretty hesitant on making predictions like that," he said told CNN Radio Saturday. "But I was feeling good."