NEW YORK (CNN) -- Nearly 27 years ago, amid a crowd of people in Central Park, Ruth Bendik's wallet was stolen. The culprit is still at large, but the wallet has been found -- in the hollow trunk of a cherry tree. 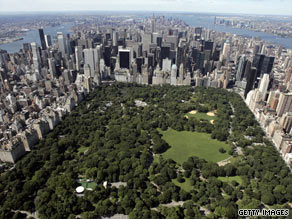 Nearly 27 years ago, amid a crowd of people in Central Park, Ruth Bendik's wallet was stolen.

The wallet was snatched on October 24, 1982, while Bendik, now 69, was in Central Park watching the New York marathon. She went to greet runners at the end of the race and, "when I got out of the crush of people, I realized my purse was much lighter," Bendik told CNN. "I was just so grateful not to have been harmed."

Last week, Josh Galiley, tree-care supervisor for the Central Park Conservancy, was chopping down a hazardous black cherry tree near Rumsey Playfield when he discovered her blue leather wallet in the trunk of the tree, which he estimates is around 65 years old and 50 feet high.

"I started poking in the soft stuff and this wallet turned up. Having been that low in the tree ... the location indicated it had been there for quite some time," Galiley told CNN.

The old wallet was a unique find, he said. "When you're cutting a tree and it's hollow, you expect stuff inside, shreds of material, old marbles, really just knickknacks compared to this," he said, "Nothing with a story. ... We peeked in and there were dates from the early '80s. We figured this was different."

After the wallet was recovered, Galiley said, officials were careful to inform Bendik properly. "We thought she may not want to relive it," he said.

Bendik sang praises for the individuals who returned her wallet, including detective Frank Irizarry, who helped track her down. "The lengths they went to find me, the extent that they went through and the fact that they were concerned about my feelings really impressed me," she said.

The wallet still contained her old driver's license and credit cards, she said, although $20 was missing. "Twenty dollars was a lot of money then," she said.

After two decades, much more has changed. Referring to two of her old bank cards from Manufacturers Hanover Trust Bank and Banker's Trust, Bendik said, "I was shocked that both banks had closed."

But some things haven't changed. Bendik continues to have fond memories of Central Park. The Ohio native, who has lived in New York for 40 years, still describes the park as one of her favorite areas in the city. "It's a public place in an impersonal city," she said, "It brings everyone together in a pleasant way of reconnecting with nature and beauty."

Today, Bendik smiles at the idea of her wallet buried in a cherry tree in Central Park for nearly 30 years, and she's happy to have it in her hands again.

"After all these years it's still available as a time capsule of my life."

All About Central Park • Crime