(CNN) -- A Southwest Airlines jet made an emergency landing in Charleston, West Virginia, on Monday after a football-sized hole in its fuselage caused the cabin to depressurize, an airline spokeswoman said. 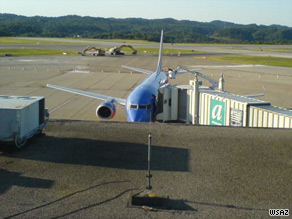 Southwest Flight 2294 made an emergency landing at Yeager Airport in Charleston, West Virginia, on Monday.

There were no injuries aboard the Boeing 737, which was traveling at about 34,000 feet when the problem occurred, Southwest spokeswoman Marilee McInnis told CNN.

The sudden drop in cabin pressure caused the jet's oxygen masks to deploy.

Southwest Flight 2294 was en route from Nashville, Tennessee, to Baltimore, Maryland, with 126 passengers and a crew of five aboard, McInnis said.

It landed at 5:10 p.m. after the crew reported a football-sized hole in the middle of the cabin near the top of the aircraft, McInnis said.

What caused the damage to the jet had not been determined, she said. Both the Federal Aviation Administration and the National Transportation Safety Board are investigating the incident, FAA spokeswoman Holly Baker said.

"There is no responsible way to speculate as to a cause at this point," Southwest said in a statement Monday night.

"We have safety procedures in place, and they were followed in this instance to get all passengers and crew safely on the ground," the airline said. "Reports we have are that our passengers were calm and that our pilots and flight attendants did a great job getting the aircraft on the ground safely."

Southwest dispatched a replacement aircraft to take passengers on to Baltimore.

The damaged jet will remain on the ground there until federal inspectors can examine it, he said.

In addition, all 181 of Southwest's 737-300s -- about a third of the airline's fleet -- will be inspected overnight after the emergency landing, McInnis said. Southwest does not expect the inspections to create delays, she said.

CNN's Shawn Nottingham and Stephanie Gallman contributed to this report.