(CNN) -- A man died after his car plunged 600 feet off the edge of the Grand Canyon's South Rim, authorities said Tuesday. 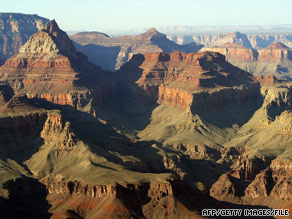 About 5 million people visit the Grand Canyon in Arizona each year.

The Arizona park's regional communications center received several reports of a car driving off the edge about 6 a.m. Monday, according to a written statement.

"Upon arriving at the scene, investigators found tire tracks leading to the edge behind the Thunderbird Lodge and received reports of a single occupant in a blue passenger car driving over the edge," the statement said.

Rescue personnel descended on ropes and found the vehicle about 600 feet into the canyon. The man's body was recovered shortly afterward, the statement said.

The incident occurred near the El Tovar hotel in a village on the canyon's South Rim, park spokeswoman Shannan Marcak said.

Authorities have not ruled the death a suicide, she said. "It has not been ruled anything at this time."

The statement said the National Park Service is investigating. Typically, Marcak said, such investigations take at least a few days.

The man has not been identified, she said.

Marcak said that within the past five years, she knows of only one other time a car was driven off the edge of the canyon.

The Monday statement said plans were being made to retrieve the vehicle and the body.