(CNN) -- The mayor of Cambridge, Massachusetts, said she is going to meet with the city's police chief to make sure the scenario that caused the arrest of a prominent black Harvard University professor does not happen again. 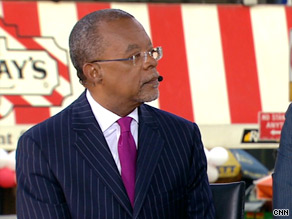 "This suggests that something happened that should not have happened," Cambridge Mayor E. Denise Simmons said on CNN's "American Morning." "The situation is certainly unfortunate. This can't happen again in Cambridge."

Harvard scholar Henry Louis Gates Jr. was arrested last week at his home after a confrontation with an officer investigating a possible break-in, according to a Cambridge police report.

Obama defended Gates while admitting that he may be "a little biased" because the professor is a friend of his.

The incident shows "how race remains a factor in this society," Obama said.

Obama's remarks are being questioned by Senate Republicans, whose campaign arm is paying for a Web ad asking whether it is appropriate for the president to say Cambridge police acted stupidly.

The ad will run on the Drudge Report.

"This isn't taking sides between the police officers and Mr. Gates," said Brian Walsh, spokesman for the National Republican Senatorial Committee. "It is the issue of whether it is appropriate for the president of the United States to be weighing in and taking sides before, by his own admission, all the facts are known."

Obama "was not calling the [arresting] officer stupid. The situation got out of hand," Gibbs said.

Gates said on Wednesday that although charges were dropped, he will keep the issue alive.

Gates said the mayor called him to apologize.

Watch how the mayor is handling the incident »

Gates said he'd be prepared to forgive the arresting officer "if he told the truth" about what the scholar called "fabrications" in the police report.

The officer, Sgt. James Crowley, told CNN affiliate WCVB-TV in Boston, Massachusetts, on Wednesday that he will not apologize.

Crowley wrote in the Cambridge police report that Gates refused to step outside to speak with him, the police report said. When Crowley told Gates that he was investigating a possible break-in, Gates opened the front door and exclaimed, "Why, because I'm a black man in America?" the report said.

"While I was led to believe that Gates was lawfully in the residence, I was quite surprised and confused with the behavior he exhibited toward me," Crowley said, according to the report. iReport.com: "Shame" on Gates

Gates said Wednesday that he and his attorneys were considering further actions, not excluding a lawsuit.

Earlier this week, a prosecutor dropped the charge against Gates and the Police Department recommended the matter not be pursued.