Drive to legalize marijuana rolls on in California

OAKLAND, California (CNN) -- Richard Lee greets students, shopkeepers and tourists as he rolls his wheelchair down Broadway at the speed of a brisk jog, hailing them with, "Hi. How ya doin'?" 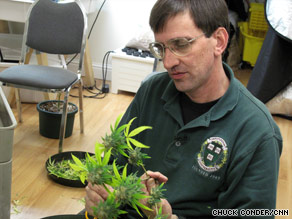 In this nine-block district of Oakland, California, called Oaksterdam, Lee is a celebrity.

Oaksterdam is Lee's brainchild, a small pocket of urban renewal built on a thriving trade in medical marijuana. The district's name comes from a marriage of Oakland and Amsterdam, a city in the Netherlands renowned for its easy attitude toward sex and drugs.

Lee is the founder of Oaksterdam University, which he describes as a trade school that specializes in all things marijuana: how to grow it, how to market it, how to consume it. The school, which has a curriculum, classes and teachers, claims 3,500 graduates.

Lee also owns a medical marijuana dispensary, a coffee house, a large indoor marijuana plantation, and a museum/store devoted to the cause of legalizing marijuana.

"I really see this as following the history of alcohol. The way prohibition was repealed there," Lee says, adding that he believes he is close to achieving his mission.

Lee is organizing a petition drive to place a marijuana legalization measure on the ballot in 2010, and he thinks the measure stands a good chance of being approved by voters.

Can we afford to make pot legal? Can we afford not to? The case for and against legalized pot, an AC 360 special.
Friday 10 p.m.

A recent California Field Poll showed that more than half the people in the state, where marijuana for medical use was approved more than a decade ago, would approve of decriminalizing pot.

The state's faltering economy is one reason why. If legalized, marijuana could become California's No. 1 cash crop. It could bring in an estimated $1 billion a year in state taxes.

Democratic State Assemblyman Tom Ammiano is spearheading a cannabis legalization bill in the California Assembly. He believes the state's need to increase tax revenues will work in his bill's favor.

"I think it's a seductive part of the equation," he says.

Ammiano says there are a number of ways legalized pot could be marketed, "It could be a Walgreens, it could be a hospital, a medical marijuana facility, whatever could be convenient. Adequate enforcement of the rules. Nobody under 21. No driving under the influence."

"I think we ought to study very carefully what other countries are doing that have legalized marijuana," Schwarzenegger says.

But Ammiano says selling a legalized marijuana bill to his fellow legislators remains a delicate matter.

"If we held the vote in the hallway, we'd have it done," Ammiano says. "But people are necessarily cautious. They are up for re-election."

And that is why Lee believes voters will approve a marijuana initiative long before the state Assembly acts. Sitting under grow lights in a warehouse filled with hundreds of marijuana plants, Lee sums it up this way: "For some people cannabis is like a religion. As passionate as some people are about their religions and freedom to think what they want and to worship as they want."

But all of that is baloney to Paul Chabot. He is president of the Coalition for a Drug Free California. He says voters should not be fooled by promises of big bucks flowing to the state from marijuana taxes.

"It's their way of sort of desensitizing our communities, our state and our nation to a drug problem that we clearly need to put our foot down on, and say, 'No more. Enough is enough.' "

Chabot points out that California's medical marijuana law has been poorly regulated, and he expects more of the same if marijuana becomes legalized for everyone.

But a substantial number of Californians seem to believe that no amount of enforcement is going to make pot go away -- and that it's time for the state to begin taking a cut of the action.

All About Oakland • Marijuana