(CNN) -- Severe turbulence shook a Continental Airlines flight Monday, injuring dozens of passengers and forcing the aircraft to divert to Miami, Florida, according to the airline and a fire official. 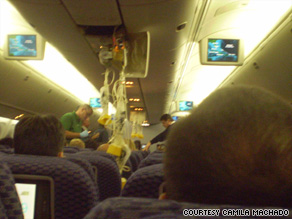 Oxygen masks hang from a damaged part of the plane Monday, in a photo by passenger Camila Machado.

There were 168 passengers and 11 crew members on Flight 128, which was heading from Rio de Janeiro, Brazil, to Houston, Texas, according to a statement from Continental Airlines.

"I've never seen turbulence like that, so I really thought we wouldn't make it," passenger Giovani Loss told CNN affiliate WSVN-TV. Loss, who is originally from Brazil, said he is a lawyer in the United States and frequently travels between the two countries.

He said passengers were afraid the turbulence may have been the result of mechanical problems with the plane.

"People [were] screaming, then there was a huge silence for like 30 minutes," Loss said.

Ambulances and other vehicles were lined up on the runway to treat and transport the injured passengers when the plane landed at Miami International Airport at 5:35 a.m.

"People that weren't seat belted in flew up and hit the ceilings," passenger John Norwood told WSVN. "So their faces, their heads hit the plastics and broke all the plastics up top."

The Boeing 767-200 hit turbulence about 50 miles north of the Dominican Republic at about 38,000 feet, according to an official with the Federal Aviation Administration. It landed in Miami an hour later with its seat belt signs illuminated, the airline said.

Many of the passengers said they did not hear any warning before the turbulence hit.

Passengers said they saw several people bleeding from their heads, including one woman who sustained a serious gash to her head.

The flight is scheduled to depart Miami for Houston later in the morning, according to Continental's Web site. It had been scheduled to arrive in Houston at 6 a.m. local time.