BOSTON, Massachusetts (CNN) -- A Boston police officer is suing the city after he was suspended for referring to a black Harvard professor as a "banana-eating jungle monkey" in an e-mail. 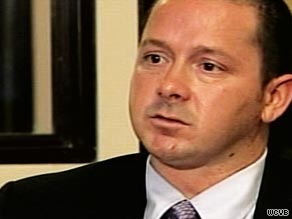 "If I'm charged with a crime I want a chance to answer. I want the chance for a fair hearing," Officer Justin Barrett told CNN on Tuesday.

Barrett has apologized and denied he is a racist.

His lawsuit claims his civil rights have been violated; Barrett's lawyer said the words referring to Henry Louis Gates, Jr. were misinterpreted.

"The choice of words were poor; but they weren't meant to characterize professor Gates as a banana-eating jungle monkey," attorney Peter Marano said. "They were meant in a response to behavior and characterizing the behavior. Not the person as a whole."

Marano said the city had effectively fired Barrett, though he is officially suspended with pay.

He said it was fair to hold Barrett to a higher standard than the general public because he is a police officer, but that he was still entitled to express his opinions.

"Being held to a higher standard shouldn't eradicate his right under the First Amendment for free speech. That is part and parcel of the lawsuit," the lawyer said.

Gates was arrested at his house last month when a neighbor called police after she thought she saw a man trying to break into Gates' home. The man turned out to be Gates himself, who was attempting to free a jammed door.

The incident sparked a national debate about race and policing, drawing in President Obama himself.

Obama, who is a friend of Gates, said the officer who arrested the professor "acted stupidly," but then withdrew the comment, saying he did not know all the facts when he spoke.

He hosted Gates and Sgt. James Crowley for a beer at the White House to calm the tensions.

Barrett later sent a mass e-mail about the encounter to other officers and to the Boston Globe newspaper.

Barrett was suspended from his military duties as captain in the Army National Guard and placed on administrative leave from the Boston Police Department pending the outcome of a termination hearing.

Barrett said he was moved to write the note because he believed a Boston Globe column about Gates' arrest "seemed like it was biased."

"It did not show the roles and duties of a police officer and how dangerous it already is without having a debate about people getting in a police officer's face, which should never happen at all."

Asked what led him to choose to use such language, he said, "I don't know. I couldn't tell you. I have no idea."

He added, in response to a question, that he had never used such language before.

Barrett used the "jungle monkey" phrase four times, three times referring to Gates and once to the Boston Globe column.

He also declared that he was "not a racist but I am prejudice [sic] toward people who are stupid and pretend to stand up and preach for something they say is freedom but it is merely attention because you do not get enough of it in your little fear-dwelling circle of on-the-bandwagon followers."

According to a statement from Boston police, Davis took action immediately on learning of Barrett's remarks, stripping the officer of his gun and his badge.

Barrett's arrests and investigations will be reviewed for indications of racial bias, Davis said. The department will also look closely at the officers who received or viewed the e-mail.