The story behind Clinton's trip to North Korea 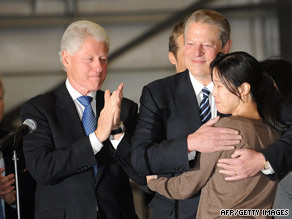 Laura Ling and Euna Lee arrived back in the United States Wednesday morning with former President Bill Clinton, who flew to North Korea to negotiate their release after they were sentenced to a labor camp.

Iain Clayton said Wednesday that his wife, Laura, told him through a telephone conversation that the North Koreans were willing to grant the two journalists amnesty if a high-level envoy, such as former President Clinton, were willing to travel to Pyongyang.

But there was no shortage of envoys ready to travel to North Korea and negotiate the women's release.

Lower-level envoys such as former U.S. ambassador to South Korea and current Korea Society Chairman Donald Gregg, Sig Harrison, an expert on North Korean nukes who has traveled there several times, and Han Park, a scholar at the University of Georgia, all offered their services.

Sen. John Kerry, chairman of the Senate Foreign Relations Committee, was also closely involved in coordinating efforts with the White House and State Department to free the women.

According to sources intimately involved with the efforts, Sen. John Kerry -- chairman of the Senate Foreign Relations Committee -- received an official invitation to visit Pyongyang to facilitate their release and open a larger dialogue on the nuclear issue after several weeks of quiet direct diplomacy between Kerry and his aides and North Korea.

In the end, it was Clinton whom North Korea wanted.

Officials said that while President Obama never spoke directly with the former president about this issue, negotiations were under way within the administration.

During the weekend of July 24-25, Clinton spoke with National Security Adviser Gen. Jim Jones about his willingness to take on this mission. Clinton ultimately agreed to go on the mission but made it very clear in every communication that this was purely a humanitarian effort.

Clinton also wanted to make sure, based on the due diligence of the national security team, that there was a high likelihood of success if he went.

"We were convinced this would be the result, and based on that we could advise President Clinton that his trip was going to be successful," one official said.

State Department spokesman Ian Kelly said Wednesday that "we did our homework ... to make sure that if President Clinton did take this trip, that we would be able to ... win the freedom for these two."

Kelly said that Secretary of State Hillary Clinton also had a role in the mission, adding that "The State Department was very involved." More details, he said, will be released.

Administration officials also said it was always made clear by Clinton and the national security team that this would be a humanitarian mission.

"We had one goal in mind, which was in the U.S. interest, which was to seek the release of these two U.S. Americans," one of the officials said. "And it wasn't in any way about our disagreements with the DPRK with respect to its conduct, or with respect to our intention to vigorously enforce resolutions and to vigorously seek the denuclearization of the Korean peninsula."

Clinton and his team engaged in a 75-minute meeting with President Kim Jong Il and then had a dinner which lasted a little over two hours.

"So the total amount of time that they were in meetings or agendas with each other was about a little over three hours and 15 minutes," one official said.

While Gore was turned down by North Korea, he was, however, actively involved in this effort from the start, speaking often with the families and the Obama administration.

On Wednesday, Obama thanked the former vice president, saying he "worked tirelessly in order to achieve a positive outcome."

Clinton's humanitarian help was not lost on Obama -- who reached out to the journalists' families on Tuesday night.

"I want to thank President Bill Clinton -- I had a chance to talk to him -- for the extraordinary humanitarian effort that resulted in the release of the two journalists," he said at the White House. "My hope is that the families that have been reunited can enjoy the next several days and weeks understanding that because of the efforts of President Clinton and Gore they are able to be with each other once again."