WASHINGTON (CNN) -- Two Russian attack submarines have been cruising in the Atlantic off the East Coast of the United States, a senior defense official said Wednesday. 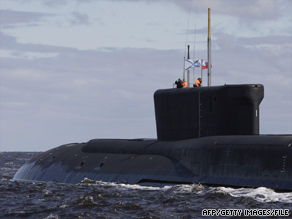 Russian attack submarines such as this one have been spotted in the Atlantic Ocean.

Pentagon spokesman Geoff Morrell said their presence is not causing alarms to go off.

"So long as they are operating in international waters, as, frankly, we do around the world, and are behaving in a responsible way, they are certainly free to do so, and it doesn't cause any alarm within this building," he said.

It has been years since Russia operated near the U.S. seaboard, thousands of miles from home ports.

"What's interesting is, they haven't been able to do this in some time, and now they are. It indicates a return to their ability to do this," the senior defense official said.

He viewed the patrol as an example of Russia showing the United States and the world its expeditionary forces, part of a continuing trend. He said the Russians have recently been a partner in anti-piracy operations around the world. And last year the Russian Navy conducted a "tour around the world," pulling into ports throughout Latin America.

In December, a Russian spokesman said that tour demonstrated "Russia's ability to fly its naval flag and ensure protection of its national interests in the world theater."

The Akula-class nuclear-powered submarines, which are normally equipped with surface-loaded cruise missiles and surface-to-air missiles, have stayed in international waters, the source said. These are not the class of submarines that can launch intercontinental nuclear missiles.

The U.S. Navy has the capability to locate, identify and track submarine activity through satellites, ships, aircraft and classified systems.

"NORAD and U.S. Northern Command are aware of Russian submarine activity off the East Coast operating in international waters. We have been monitoring them during transit and recognize the right of all nations to exercise freedom of navigation in international waters according to international law," said Lt. Desmond James of the North American Aerospace Defense Command.

A Russian military spokesman said at a news conference in Moscow that the submarines' activities were "part of the normal process."

Defense officials told The New York Times that one of the Russian submarines was in international waters Tuesday about 200 miles off the coast of the United States. The location of the second was unclear.

U.S. officials downplayed the significance of the submarines operating off the U.S. coast.

"There is no need to overreact," the senior defense official said.

"This is not an issue of concern. It is all consistent with the internationally-recognized principle of freedom of navigation. As long as the vessels do not cross into territorial waters, they are free to navigate any open waters," another official said.

Officials have said this is the naval equivalent to Russian bomber missions close to U.S. and other countries' borders.

"It is Russia again trying to assert its influence and trying to show they have a relevant military," a third defense official said.