(CNN) -- A mechanical failure on a roller coaster at an amusement park in Santa Clara, California, on Monday afternoon left 24 people stranded for hours on the ride, some as high as 80 feet off the ground, authorities said. 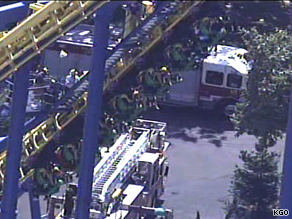 "The ride was ascending to the highest point of the ride, actually where it begins, and then it just stopped," said Augie Wiedemann, deputy fire chief of the city. No injuries were reported.

The Invertigo ride at Great America Theme Park stopped about 12:15 p.m. (3:15 p.m. ET) and passengers were stuck for at least three hours, he said.

Video from CNN television affiliate KGO showed firefighters removing passengers from the ride's restraint system and lowering them into a basket atop a fire truck.

The last passengers got off the ride by 5:45 p.m. (8:45 p.m. ET), Wiedemann said. After, the passengers were given soft drinks and pizza, he added.

"We work in the off-season with park personnel to prepare for things like this," Wiedemann said. "You can see that in how well the rescue operation is going."

Passengers received water to prevent dehydration as they waited in 90-degree heat.