(CNN) -- The price of big screen televisions has been coming down, but this was ridiculous. 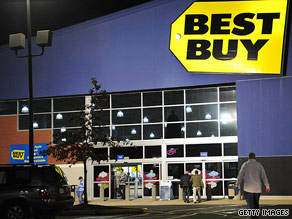 Best Buy's Web site offered a 52-inch TV for less than $10, but the deal was too good to be true.

As customers jumped on the Web site trying to take advantage of the offer, Best Buy announced it was a "pricing error" and was no longer available.

A recorded message on Best Buy's customer service line told customers "we will not be placing any more orders for this unit," and messages were sent on Twitter apologizing "for any disappointment."

Customers who placed orders early Wednesday were left wondering if they got away with the bargain. Eric VanBergen of Grand Rapids, Michigan, told CNN he snapped one up for $84.79 -- including $70 shipping and taxes -- at 5:30 a.m. Then, he ordered a second.

Dozens of customers were posting to Twitter and Bestbuy.com, saying they also placed often multiple orders.

It appears they are out of luck. In a statement, Best Buy apologized for the mistake but said it would "not be honoring the incorrect price."

Company representatives posted online messages telling customers "All current and previous orders made for the TV at this price on BestBuy.com will be cancelled, and customers will be refunded in full for the purchase."

The company's Web site states Best Buy reserves the right to "revoke offers or correct errors" even if a credit card has already been charged.

The price mix-up gave way to customer frustration as people lost out on the deal of the year. ".bestbuy dang you!!!!" was how VanBergen reacted on Twitter after learning that his two confirmation e-mails from Best Buy were meaningless.

But it appears there is little else they can do. A spokeswoman for the Federal Trade Commission that investigates consumer complaints told CNN "The FTC act bars unfair and deceptive commercial practices." Those would be cases of phony offers or sweepstakes, rather than a mistake, she said.

All About Best Buy Co. Inc.