(CNN) -- A single-engine airplane made an emergency landing on a California highway Sunday morning, though no major injuries were reported, authorities said. 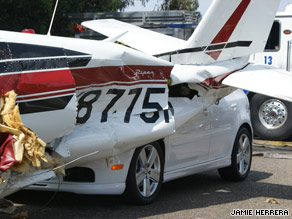 The Piper Comanche 260 carrying a married couple landed on the southbound lanes of U.S. Highway 101.

The plane's engine quit, and as the pilot descended, he lost control of the plane and landed in the southbound lane facing oncoming traffic. The plane struck two vehicles while landing, then spun and hit another one with its tail, Richards said.

One vehicle passenger was treated for minor injuries, he said. No other injuries were reported.

He added that the plane had departed Temecula in southwestern Riverside County, California, and was destined for the airport in Santa Barbara, a flight of about 180 miles.

The pilot told authorities that he attempted to switch fuel lines during the flight, but was unable to restore power to the plane. He said he alerted a tower at the airport that a landing on the highway was imminent, Richardson said.