ARLINGTON, Virginia (CNN) -- American children aren't necessarily getting smarter or dumber, but that might not be good enough to compete globally, according to numbers cited Tuesday by Secretary of Education Arne Duncan. 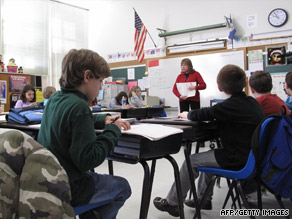 The National Center for Education Statistics found U.S. students placed below average in math and science.

He noted a special analysis put out last week by the National Center for Education Statistics that compares 15-year-old U.S. students with students from other countries in the Organization for Economic Development.

It found the U.S. students placed below average in math and science. In math, U.S. high schoolers were in the bottom quarter of the countries that participated, trailing countries including Finland, China and Estonia.

According to the report, the U.S. math scores were not measurably different in 2006 from the previous scores in 2003. But while other countries have improved, the United States has remained stagnant.

In science, the United States falls behind countries such as Canada, Japan and the Czech Republic.

Duncan told a room full of science and math experts of the National Science Board on Tuesday morning that this will hurt the United States as it competes internationally. "We are lagging the rest of the world, and we are lagging it in pretty substantial ways," he said.

"I think we have become complacent. We've sort of lost our way."

He acknowledged that in some areas of the United States it is hard to find good math and science teachers. To solve that problem, he said, "I think we should pay math and science teachers a lot more money. We pay everybody the same. We have areas of critical need -- math, science, foreign language, special education in some places. I think we need to pay a premium for that."

The National Education Association, which represents teachers, argues against such a proposal.

"Simply being a teacher of a hard-to-staff subject does not equate with effective instruction, and therefore, should not be rewarded in-and-of-itself through a salary differential," the organization says in a position statement.

The fourth- and eighth-graders who were part of the mathematics testing have improved their average scores compared with their European counterparts, but they still lag behind their Asian peers in China, Hong Kong, Japan, Korea and Singapore.

"It has huge implications," Duncan said. "I think as a real economic imperative we have to educate our way to a better economy."