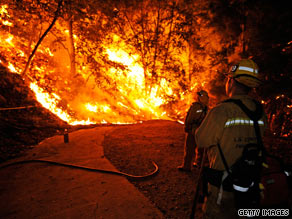 Firefighters look on as fire rages near Ocean View Drive in Los Angeles on Saturday.

"Today what happened is what I called a perfect storm of fuels, weather and topography coming together ... essentially the fire burned at will," Mike Dietrich of the U.S. Forest Service said Saturday.

Authorities consider the Station fire an anomaly, as it is not driven by strong winds as most California wildfires.

"The fire has been very active on all fronts," U.S. Forest Service spokeswoman Randi Jorgensen said.

The fire threatened about 10,000 homes in Los Angeles County and 900 homes were evacuated, she said.

"Basically, all the homes that back up to the National Forest in the La Canada-Flintridge are in danger from the fire," Jorgensen said, adding that fire officials have told residents to be prepared for possible evacuation orders.

The Station fire disrupted power to 750 homes. More than 750 workers have been dispatched to control the blaze, which started Wednesday afternoon.

Watch iReport images and descriptions of the fire »

Firefighters fully contained another fire that torched 230 acres about 20 miles southwest of downtown Los Angeles on Friday. The blaze, called the Palos Verdes fire, forced 1,200 people to evacuate and destroyed five homes and two other buildings.

Another fire in the Angeles National Forest had burned more than 2,100 acres. The blaze, called the Morris fire, started Tuesday. That fire was about 85 percent contained Friday evening, officials said.