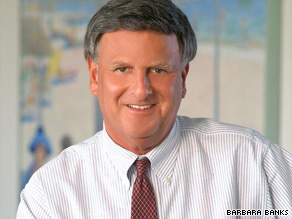 (CNN) -- Richard Nixon had been president for less than two days, I was 21 and visiting Washington for the first time, and I decided that I'd like to see what the United States Senate looked like when it was in session.

I had come to Washington to watch the inauguration; this was in January 1969, and after the political turmoil of the year before, it seemed like it might be interesting to travel from the Midwest, where I was a college student, and witness the swearing-in. Now that was over; Nixon was at work in the White House, and before departing town I made a stop at the Capitol.

I don't know what I was expecting when I stepped into the visitors' gallery of the Senate -- maybe something filled with drama, like in a movie. Maybe high-decibel, finger-wagging debate, with all 100 senators standing and asking for the floor.

What I encountered was considerably less frenetic. There were perhaps 10 senators present. Whatever was going on was utterly routine, most mundane. The senators who were down there were making statements merely for the record.

The president of the Senate -- Spiro T. Agnew, who had just inherited the job by virtue of having been sworn in as Nixon's vice president -- was sitting at the front of the chamber, officially in charge of the proceedings. Tourists would wander into the spectators' section, watch for a few minutes, and then -- seeing for themselves that nothing of great note was going on -- would leave.

And then Ted Kennedy stood up to speak.

He was not yet the Lion of the Senate. That phrase is one we've been hearing in the days since his death; the phrase is used to recognize his almost 50 years as a U.S. senator, his mastery of the legislative process, his senior status. On that January day in 1969, he was a thin, restless-looking young man who was asking to be recognized.

And as the young Ted Kennedy began to speak, a remarkable thing happened.

The galleries started to fill. There had been no announcement in the corridors of the Capitol; no one had gone out into the hallways to inform the tourists that Ted Kennedy now had the floor.

Yet the word spread, and within seconds, every seat was taken, and Senate employees were standing in the doorways telling people in the long lines that were forming that there was just no more room.

Kennedy, in a dark-blue suit, was speaking about an aspect of unrest in far-off Nigeria. All he was doing was elaborating on a point that a colleague had made. This was not an earth-shattering speech.

His voice -- that family voice -- filled the chamber. Maybe we were not quite so cynical back then; maybe when we saw political figures, we did not automatically categorize them as liberal or conservative, and then embrace them or dismiss them depending on our own leanings. Or maybe I'm fooling myself -- maybe the world was just as cynical then, but I was seeing it all through the unquestioning eyes of someone who had never set foot in the Senate before.

But I can tell you this: I wasn't alone. Every person in that gallery was present because Ted Kennedy, the remaining brother, was down there, in the flesh, in front of them. The bloodshed that had accompanied the loss of his brothers, the abruptness of how they had been taken from their families, and from the nation ... and here, on the mostly empty floor of the Senate, was the last of them, was Ted.

It was as if the rest of the Senate was in black-and-white, and he was in color. That's the only way I can describe it; maybe, over all the years, that doesn't make any sense to you, but that is what it felt like. He told Spiro Agnew that he would like four additional minutes to conclude his thoughts; Agnew said yes.

When Kennedy was finished, he sat down, and with that, the spectators began to leave the galleries as if a fire alarm had sounded. Sen. Jacob Javits of New York asked to speak; he proposed -- "as I did 12 years ago," he said -- that the Senate's rules be amended so that microphones to amplify the senators' voices be installed on the desks, as, he said, they were in the House of Representatives. If the senators were worried that there was insufficient space on their desks for these modern devices, Javits said, perhaps they could be placed in the spots occupied by the holders for quill pens.

The Senate was in black-and-white again. Ted Kennedy leaned back in his chair. Across the Potomac River, in Arlington National Cemetery, his brothers rested. It was a long time ago.