LOS ANGELES, California (CNN) -- Bone-dry conditions in an area that has not seen a major fire in more than 60 years pushed a Southern California wildfire from 45,000 acres to more than 100,000 acres in a matter of hours Monday, fire officials said. 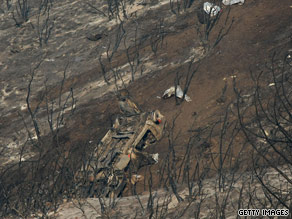 A charred fire truck sits at the bottom of a hill Monday near Acton, California. Two firefighters died in the vehicle.

"This is a very difficult firefight," Dietrich said. "This is a very angry fire that we're fighting right now. Until we can get a change in weather conditions, I'm not overly optimist."

Weather forecasts show little change in conditions for the next four to five days.

The fire, which has sent plumes of thick smoke spiraling as much as 20,000 feet into the air, is creating its own wind patterns, making it unpredictable, officials said.

See images of the wildfire »

"This fire is headed just about anywhere it wants to right now," said Dietrich, who earlier said the blaze had "a mind of its own."

Fire officials said Monday they had issued evacuation notices for residents of the 10,000 homes under threat. Nearly 100 homes were added to the notices Monday afternoon.

"There's six individuals, they're up there, they've been asked to leave three times," Fender said. "They refuse to leave. That's their choice."

Earlier reports indicated the six were trapped at their Gold Canyon ranch and firefighters were unable to reach them, but Fender said he had no indication that was true.

"They've all shared that they do not want to leave," he said.

The fire claimed the lives of two firefighters Sunday. Capt. Tedmund Hall, 47, and Specialist Arnaldo Quinones, 35, were killed when their vehicle went down a steep, 700-foot embankment, Dietrich said.

Hall was with the department for 26 years and Quinones for eight years.

Watch a fire official give details on the "tragic" accident »

Dietrich said the blaze had destroyed two communications arrays in the area but had not flared up on Mount Wilson, home to 20 television and radio transmission towers, fire and police communications equipment and the Mount Wilson Observatory.

That area is under a critical threat and a strike team is in position to protect the observatory. But, Dietrich stressed, "My No. 1 priority is our firefighters' safety."

"If they have to abandon the position, there's no facility that is worth a human life," he said.

Despite the difficulties, Dietrich told reporters that firefighting teams "will not rest until it's out." And Los Angeles County Fire Department Deputy Chief Mike Bryant noted that "there have been hundreds of homes saved by firefighters in this effort."

The Station fire was the largest of eight blazes burning across the state on Monday, officials said.

Gov. Arnold Schwarzenegger said Monday his administration is "working around the clock to ensure that our brave men and women working on the fires' front lines have the resources needed to respond and beat back these fires as quickly as possible.

"We have the toughest and best-trained firefighters in the world fighting to protect public safety and property," Schwarzenegger said. "I am confident in the state's response as these fires continue to burn throughout California."

The governor on Monday toured damage left in the wake of the 49 Fire in Placer County, in northern California. As of Monday, the fire had burned 275 acres and was 50 percent contained. On Sunday, the governor expressed his condolences for the loss of the firefighters in the Station fire.

Learn more about areas under threat »

The Station fire started Wednesday and had destroyed 18 structures by Sunday. At least 10,000 homes, 500 businesses and 2,000 other structures are threatened by the fire, which exploded in size over the weekend, fueled by low humidity and high temperatures. Evacuations have been ordered for an unspecified number of residents.

One of them was Elsa Aguirre, 57, who left her ranch home in Altadena, California, early Saturday. She, her husband and her cat were at a Red Cross shelter in a high school on Monday. Aguirre brought a box of mementos with her, including her mother's tea set from Argentina.

"The challenge is going to be going back to reality because I've been looking at the fire and the mountains from where I am," she said. "The mountains look pretty spooky right now without any vegetation. ... I'm just taking it one day at a time."