Investigation under way into cause of Station fire

LOS ANGELES, California (CNN) -- The investigation into the massive Station fire north of Los Angeles is underway with authorities working to determine how the raging fire started, fire officials in California said Wednesday. 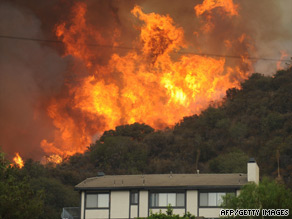 A massive wildfire burns Tuesday near a house in La Crescenta, California, near Los Angeles.

Despite reports that U.S. Forest Service spokesman Carlton Joseph said the fire burning in the Angeles National Forest was "human-caused" -- either accidentally or intentionally -- other officials insisted that the cause of the fire is under investigation, and natural sources have not been ruled out.

Thousands of anxious Southern California residents have been displaced by the Station fire burned 140,150 acres by Wednesday.

However, Fire Chief Mike Dietrich with the U.S. Forest Service characterized Wednesday as a "good day," noting the fire is 28 percent contained -- up from 22 percent the day before.

"We're fighting for every foot of containment we can get on this fire," Dietrich said.

Watch as firefighters are forced on the defensive »

He said firefighters have made progress controlling the northern and western parameters of the fire, but the top priority is to keep the southeastern corner of the fire away from areas along Interstate 210, including Pasadena, Aracadia and Sierra Madre. The blaze is headed toward the San Gabriel Wilderness Area of the Angeles forest. The San Gabriel represents the eastern edge of the fire, he said.

Nearly all of the fire was in forest land and the nearby foothill communities, including La Canada-Flintridge, La Crescenta and Acton.

"This is a very complicated situation, and it continues to be complicated as it moves east," Dietrich said.

Residents have fled from 10,000 homes along the edges of the Angeles Forest since the fire started last Wednesday. However, the majority of evacuees were allowed back in their homes by Wednesday.

Noiren said two dozen Forest Service workers also were displaced by the fire, and the agency lost an entire fire station to the blaze.

See images of the wildfire »

Beth Halaas sifted through the ashes of her family's charred home in Los Angeles County, trying to find something to salvage.

"It's stuff. Hold on to some of it for traditions. But you've got to remember it's just stuff," she said on CNN's "Campbell Brown."

See where the fire is burning »

Noel and Marta Rincon had to evacuate their home in Tujunga, on the western side of the fire. Fire was actively burning in the Little Tujunga canyon area, according to fire officials.

"I thought that we were losing our home," the husband said of the residence where he was born and the couple raised their family.

When a Sky Crane helicopter doused the flames before they could reach the structure, the two were visibly relieved.

"It's very scary," the wife said, "but our captain over here keeps assuring us our house is very savable and that we are going to be fine."

See how these wildfires grow »

The fire has destroyed 64 homes, three commercial properties and 49 outdoor structures since it began on August 26, authorities said.

The state has spent about $27 million so far fighting the fire in the Angeles National Forest, Dietrich said.

Earlier, Gov. Arnold Schwarzenegger was asked about the cost of the firefighting, given the state's precarious financial position.

"I've made it clear that even though we have a budget crunch and we have an economic crisis and we just solved a $23 billion deficit, we will always have the money available to fight the fires because public safety is our No. 1 priority," Schwarzenegger responded. That budget gap covers two years.

Watch homeowner: "It's completely bombed out" »

The governor said he insisted that the state budget he signed in July have a $500 million reserve for emergencies such as fires. California has had 5,000 blazes so far this year, he said.

He said 21 firefighters have been injured battling the Station Fire, in addition to the two killed Sunday in a vehicular crash trying to escape fast-moving flames.

Wednesday's valley and desert temperatures could reach 103 degrees, the National Weather Service said, while mountain highs were forecast to be 100. While potentially beneficial higher humidity was expected, thunderstorms were possible, and they could bring the danger of dry lightning that could ignite more fires, forecasters said. They also pose the danger of downdrafts that could create more fire fronts, officials said.

Cooler temperatures are predicted for the weekend.

All About California • Wildfires • Los Angeles