WASHINGTON (CNN) -- The U.S. Coast Guard promised a "thorough review" Friday after a training exercise intended to have been "normal" and "low profile" wound up instead triggering concerns about the security of the president on the anniversary of the September 11 attacks. 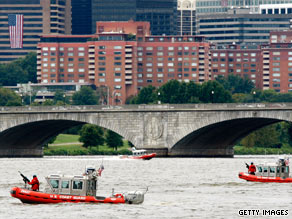 The Coast Guard vessels were moving rapidly in the water as the president's motorcade drove on the nearby Memorial Bridge, after a September 11 commemoration event at the Pentagon.

In a Coast Guard radio transmission audible over police scanners monitored by CNN, a voice could be heard saying, "You're approaching a Coast Guard security zone. ... If you don't stop your vessel, you will be fired upon. Stop your vessel immediately."

CNN called the Coast Guard immediately after the initial reports suggesting possible trouble in the water; a spokeswoman said she had no information about activity in that area.

Over the next 20 to 25 minutes, CNN made several phone calls and sent several e-mails to the USCG spokeswoman, asking for information. The spokeswoman said she was attempting to get information but was not able to get any.

After CNN heard the radio transmission saying 10 rounds had been expended, CNN went to air with the story.

At 10:23 a.m. ET, after CNN had aired its initial report, the spokeswoman said that she had heard the incident may have been an exercise but that she did not know the source of that information.

At 11:09 a.m., CNN received a Coast Guard e-mail confirming that it was a training exercise.

The Coast Guard said that a training frequency had been used for communication.

Currier said that such radio transmissions generally begin with an announcement that they are training exercises but added that he did not know whether that was done in this case.

Officials said that no shots were fired and that the radio announcements were a standard part of the exercise.

Other agencies, including the Secret Service, which protects the president, had not been notified of the exercise in advance.

The Secret Service said Obama had returned to the White House by the time reports surfaced of possible shots fired in the area.

Watch how the exercise on the Potomac stirs up commotion »

Federal agency emergency operations centers were neither aware of nor notified about the exercise and began implementing response procedures as though it had been a real event, a federal source said.

The report led officials at Reagan National Airport to ground flights from 10:08 a.m. to 10:30 a.m., said Diane Spitaliere of the Federal Aviation Administration.

The FBI, upon hearing media reports, dispatched agents who had reached the water's edge before they learned from other law enforcement agencies that the incident was an exercise, said Supervisory Special Agent Katherine Schweit, a spokeswoman for the Washington Field Office.

The Metropolitan Police Department Harbor Patrol, which is responsible for patrolling the Potomac, was not notified either, law enforcement sources in Washington said.

The patrol has now demanded that the Coast Guard notify it in before carrying out any training exercises on the Potomac, the sources said.

Currier said such exercises take place four times a week, and other agencies are generally not informed.

Sen. George Voinovich, R-Ohio, was critical of the way the exercise was handled.

"The anxiety caused by this situation on such a solemn day is extremely disturbing," he said in a statement, adding that he would like to hear from Homeland Security Secretary Janet Napolitano. "It sounds very much like the left hand didn't know what the right hand was doing."

Military Families United, an advocacy group, called for an investigation. The incident was "at the height of irresponsibility," the group said in a statement, adding that whoever commissioned it "should be held accountable."

"These families have traveled from all over the country to convene at the Pentagon on this tragic anniversary, and this training exercise not only caused unwarranted stress for these families but it was a distraction from the purpose of today. ... This kind of incompetence and insensitivity cannot be permissible and should be addressed at the highest levels of government."

The Coast Guard said in its statement, "The best way that we in the Coast Guard can remember September 11 and our security obligations to the nation is to be always ready and this requires constant training and exercise. To ensure the appropriate readiness posture we conduct training scenarios across the nation on a daily basis."

He said he saw no parallels to an incident in April, when a plane resembling Air Force One flew low over New York as part of a government-sanctioned promotional photo shoot. The incident triggered security fears and angered the White House.

Regarding Friday's incident, Gibbs instead criticized the media -- specifically CNN, which reported the incident as it was unfolding.

"I think, it appears as if a lot of this might have been avoided," he said, referring to what was "on television." Expressing frustration, he said to a CNN correspondent, "It's not directed at you, just writ large at CNN."

"If anybody was unnecessarily alarmed based on erroneous reporting that denoted that shots had been fired, I think everybody is, uh, everybody is apologetic of that," Gibbs said.

In a statement, CNN said, "Given the circumstances, it would have been irresponsible not to report on what we were hearing and seeing. As with any breaking news story, information is often fluid, and CNN updated the story with the official explanation from the Coast Guard as soon as it was provided."