In Afghanistan, troops trying to blend in better

WASHINGTON (CNN) -- U.S. Army ground commanders in Afghanistan say they need help, fast. That's not a request for more troops, but a request from commanders who say the current camouflage uniform is not blending well in the diverse countryside. 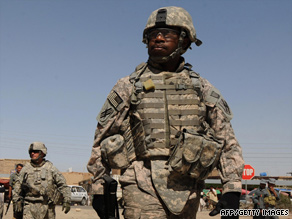 U.S. Army commanders in Afghanistan say the current uniform does not blend well in the countryside.

In response, the Army later this month will field-test two new camouflage color schemes and patterns on about 1,000 soldiers in Afghanistan, where the terrain is extremely varied.

Commanders have had problems there because of the numerous changes in environments a soldier can move in and out of in a short period of time -- from woodland to desert to alpine, and to rocky and snowy mountain tops.

The current uniform, known as the Army Combat Uniform or ACU, has lighter shades of green and tan, which some commanders have complained does not blend well if soldiers need to stay motionless on a mission, as snipers or reconnaissance troops must.

The effort by the Army was recently accelerated, according to Army officials, after U.S. Rep. John Murtha, D-Pennsylvania, told the Army he had a number of complaints from soldiers in Afghanistan who said the current camouflage pattern was not effective in the mountainous regions.

Two yet-to-be-identified battalions -- a battalion has about 500 troops -- will test the two patterns, with initial results being turned into Army researchers by the end of October.

While deployed, all 1,000 soldiers will have their regularly issued ACUs. In addition, one battalion will also get one of the new camouflage uniforms with a test pattern known as "MultiCam." The pattern is made up of numerous blobs of white, brown, tan, black and greens for a more woodland look, and is already being worn by snipers and special operations forces.

The other brigade will test a similar pattern to the ACU, called the Universal Cammo Pattern-Delta or "UCP-Delta." While the pattern is the same, a series of "digitized" blocks of green and tan, the test uniform adds what he Army calls "coyote brown" and a slight color darkening all around to the greens and tans. The look is also designed to blend in the woods.

Both battalions will be based in eastern Afghanistan where the terrain is the most rugged and diverse, Army officials said.

The Army hopes to have the field input and a decision on what pattern is best by the end of January 2010 and the fielding of the new uniform as early as June 2010.

Troops will still keep the existing ACU, and commanders will be able to decide mission by mission what the soldiers should wear, according to Army officials.

The testing is part of the Army's long-term development of a permanent alternative to the current ACU, according to Army officials.

All About Afghanistan War • U.S. Army