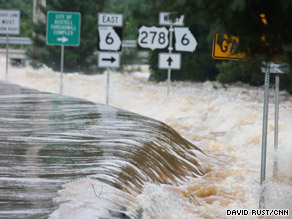 Floodwaters roar across the highway in Paulding County, one of the hardest-hit in Georgia.

He hustled out of bed and rushed to the door. There were his neighbors, surrounded by floodwaters the neighborhood is supposed to experience only once every 100 years.

Jackson raced to his basement and the water level -- submerging nine of the 13 steps to the floor -- filled him with dread. His dog, a 2-year-old pomeranian, slept in a kennel down there.

"My first initial thought was my dog is dead ... he didn't have a chance," said Jackson of Powder Springs, Georgia, where he and the rest of the residents in the metro Atlantan subdivision spent Monday stranded by acres and acres of water. The dog, named J.J., died in the flooded basement.

Jackson is just one of thousands of Georgia residents trying to salvage their homes after days of rain rushed deadly flood waters to their part of the world. Counties west of Atlanta, including Douglas, Paulding and Cobb, were among the worst hit.

The National Guard was poised to enter the area if necessary.

Aerial video of Powder Springs, near the Paulding-Douglas county line, showed scores of homes swallowed by muddy waters as the rain refused to subside. In one Powder Springs neighborhood, a fire truck floated near a cluster of two-story homes, with the charred remnants of one house smoldering a few yards from the failed response.

After flying over the disastrous scenes in Paulding and Douglas counties, Georgia Gov. Sonny Perdue declared a state of emergency in those and 15 other counties hit by floods.

At least five flood-related deaths were reported across Atlanta-area counties -- three fatalities in Douglas, one in Gwinnett and one, a child, in Carrollton.

A Douglas County hospital reported no running water. Just across the line, in Cobb County, the entrance of Georgia's largest amusement park, Six Flags, was sitting in water.

Watch the flooding in Georgia »

Powder Springs resident Kim Harp woke up at about 4 a.m. Monday as her brother bounded up the stairs from his basement room, reporting water spilling into the home. The family scrambled to save photo albums and other personal valuable, but the water reached a depth of 2 feet in the basement less than two hours later.

"It just came so fast," Harp said, adding that the water was at head-level by midday. "It really terrified us."

Harp, who lives next door to Jackson, said she and her husband, three children and brother went to bed Sunday after another day of Georgia rains with little worry. After all, she said, the family has a 7-foot retaining wall in the backyard, and it's never even come close to a breach.

"It really wasn't a concern," she said.

Now, without flood insurance, Harp has only one thing on her mind: Clean up.

Still, "where do you start?" she asked. "Where does the family go from here?"

All About Georgia • Floods