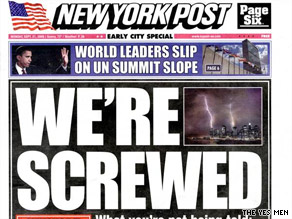 The Yes Men activist group says everything in the bogus edition of the tabloid is "100 percent" true.

But the Post, owned by Rupert Murdoch's News Corp., wasn't impressed, calling the effort by perennial pranksters the Yes Men a "Witless Spoof in Flawless Format" in a statement released Tuesday, a day after the faux Post hit the streets.

The overall endeavor, the Post said, was a "limp effort," and the fraudulent newspaper "has none of the wit and insight New Yorkers expect from their favorite paper. The Post will not be hiring any of their headline writers."

A phony "Early City Special" edition of the popular tabloid greeted millions of New York City commuters early Monday with a blaring "WE'RE SCREWED" headline. The headline and everything else in the 32-page publication, including some bogus advertisements and comics, revolved around climate change.

Even the Post's notorious "Page Six" gossip and "Best Sports in Town" sections were spoofed with various true celebrity and sports articles connected to the green movement and climate change awareness.

A statement released by the Yes Men, an activist group whose members have posed as officials and spokesmen of various organizations, companies and agencies, said that although their version of the New York Post is a fake, "everything in it is 100 percent true, with all facts carefully checked by a team of editors and climate change experts."

The Post parody appeared a day before Tuesday's U.N. climate change summit, "where Secretary-General Ban Ki-moon will push 100 world leaders to make serious commitments to reduce carbon emissions in the lead-up to the Copenhagen climate conference in December," the group said.

Yes Men spokeswoman Natalie Johns said the aim of the stunt was to "report really important and relevant issues that have not been in the press a day before a U.N. climate meeting."

Johns said the fake New York Post printing cost between $30,000 and $40,000, and was funded by numerous private donations of various amounts.

On November 12, 2008, New Yorkers awoke to the organization's first prank-in-print, finding strategically located "special editions" of The New York Times around the city. The counterfeit Times, dated July 4, 2009, centered on the fictitious conclusion of the Iraq war, as well as other matters connected with the end of the Bush administration.

The Yes Men also have posed as spokesmen for organizations including the World Trade Organization and the U.S. Department of Housing and Urban Development. Their activities were documented in the 2003 film "The Yes Men."