ATLANTA, Georgia (CNN) -- Seydi Burciaga just finished her overnight shift at Sam's Club, where she worked for the past 10 years. She made her way through the pouring rain in her minivan and turned onto her cul-de-sac in suburban Atlanta. 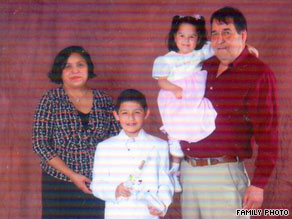 Seydi and Pedro Burciaga were married for 14 years with two children. "She was a very loving mother," he said.

She was three-tenths of a mile from home. The mother of two young children never made it.

Floodwaters from a swollen creek swept her Nissan Quest from Desiree Drive around 5 a.m. Monday. On a normal day, the creek is only a few feet wide.

But days of nonstop rain turned the seemingly harmless waterway into a raging river. It sits at the bottom of a steep hill on a street with no lights. It would've been nearly impossible to see the swift-moving water or how deep it was in the pre-dawn darkness.

Her car was picked up and carried behind an elementary school and lodged in trees. Water was coming in fast, she told a 911 dispatcher.

"Please, come help me," she says, her voice cracking. "Please."

The 911 dispatcher draws silent for a moment. "Alright, ma'am. Just stay as calm as possible."

During the next 12 minutes, the dispatcher would try to reassure Burciaga as she elicited clues as to the caller's exact whereabouts.

It was a neighborhood Burciaga knew well. She'd lived there for the past decade. She was known as the neighborhood mom who would take anyone who needed help to the dentist or the doctor. Fluent in Spanish, she would often act as translator.

"She was a very loving mother, a good wife, a strong woman," said Pedro Burciaga, her husband of 14 years. "She liked helping everyone, and overall she worked very hard. ... She always had a smile for everyone."

As her life teetered in the balance, she described being near a yellow house and tried to give other details of where her vehicle was. The 911 call was one of more than 400 before daybreak Monday that sent rescue crews through the floodwaters of Gwinnett County, a large suburban county northeast of Atlanta.

"My car is turning. Now the wheels is getting up, and I'm going to drown," Burciaga says.

A fire rescue team was at the scene by 5:09 a.m. Police arrived at 5:13 a.m. She was still on the phone with dispatch. The entire roadway was submerged by 5 or 6 feet of water. Nearby parked vehicles were nearly covered by the rushing water. An outbuilding had been carried from its foundation.

Watch how to escape from a sinking car »

"Listen to me. You're not going to drown. Roll down your windows, if you're able to, and get out of your vehicle," the 911 dispatcher says.

"Ma'am, if you can break it, break it. Do whatever you can to get out of your vehicle."

"It doesn't matter about your car," the dispatcher says. "What matters is your life. We're going to save your life."

A few moments later, the waters intensify. "It's taking me down now," Burciaga says, crying.

"It's taking you down," the dispatcher repeats. "Just stay on the phone with me. I'm right here. I'm gonna stay with you."

"OK, listen, you're not going to drown. We're going to be there for you. Just stay with me, OK?"

Her voice grows more concerned. Her cell phone goes out at 5:16 a.m. According to a police report, rescue crews tried to swim into the water to find her, but the waters were moving too fast, and they couldn't spot her.

After about an hour, the waters receded. Her vehicle was 300 yards away. She was found across the back seats of her minivan. She was dressed in blue jeans, a green shirt and gray tennis shoes.

Burciaga, a Mexican immigrant, was to turn 40 on November 18. She was the mother of a 9-year-old son and a 4-year-old daughter. Her ritual every night was to tuck them in bed before heading off to work.

"She would give them a blessing, a kiss," her husband told CNN.

Burciaga's death was one of at least nine in severe flooding that has shut down roads across north Georgia and caused gridlock on Atlanta's already congested highways.

See flood photos across the Southeast »

Her death troubled even the most veteran law enforcement personnel.

"There's really no words to describe it," said Gwinnett County police spokesman David Shiralli. "We're here to save lives when we can. When we do everything in our power and we still fail at it, it makes us feel bad."

On the quiet street where Burciaga lived, residents made a makeshift memorial at the small bridge over the creek. Flowers were placed at the foot of the street; an angel figurine stood with her hands clasped in prayer.

Nearby, shrubbery was flattened, possibly from her vehicle. The creek was back to being a tiny waterway. Residents said it floods often during rainstorms, but they'd never seen anything like Monday.

"At night when it's dark and water is covering the road, you can't really see it. It's not the first time it has overran, but it's never been that high before," said Nathaniel Knight, who lived next door to Burciaga for the past five years.

Knight was still shaken by her death. "She's just a really nice person, a woman that works the night shift. Just so nice." He said he felt for her husband: "This just has to be horrible, just devastating for him."

A viewing for friends and relatives was held Tuesday evening. In nearby Duluth, her colleagues at Sam's Club were beginning their night shift, minus their colleague of the past decade.

"We've lost a valued member of our family, and we will always remember her smile," said store manager Annette Gillespie. "She was an outstanding associate and hard worker, but most importantly, she was our friend."

Her husband struggled for words. His favorite memory: "Her smile, how she was with my children. She loved them a lot. She gave them lots of love."

"Now I'm destroyed because I'm going to miss her a lot."