(CNN) -- Daniel Gray loves automobiles so much that it almost feels wrong to drive another vehicle: "I'll admit it. I love my car, but I cheat on it with a different car every week," he said. 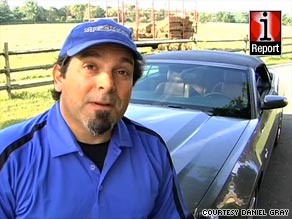 Car reviewer Daniel Gray loves to drive, but he decided to try getting around without a car for one afternoon.

The Belle Mead, New Jersey, resident runs the car-review Web site mpgomatic.com with a focus on fuel efficiency, but even he strays over to public transit every now and then. Nowadays, even the biggest car lovers are taking notice of energy conservation.

Readers may not realize a guy who revs engines for a living might need a ride back home after dropping off a test car in New York. In these cases, he typically takes a train most of the 55-mile trip and gets a car ride for the rest of the route.

Gray shared an iReport video explaining how he decided -- for one day only, he emphasizes -- to see whether he could go entirely without the assistance of an automobile on the return trip. His journey was successful, but he spent an extra hour fumbling around with local buses and taking an unintentional detour to a local mall.

Watch how drivers ditched cars for a day »

"Taking car-free trips back from the city is an eye-opener," he said, noting that the area could benefit from better bus service to get to the Princeton Junction train station. iReport.com: Car reviewer goes car-free (temporarily)

Gray says he believes government policies have supported urban sprawl instead of efficiency and transit, and 2008's gas-price spiral provided a lesson in the importance of conserving fuel and using public transit.

"Energy independence and alternative fuels represent this country's future. They are our best shot for economic revival."

Since he first started buying cars, Gray has been concerned with fuel conservation.

He got his early muscle cars during the 1979 gas crisis, which meant he could only gas them up on alternating days of the week. With a few mechanical tweaks to his Tri-Power GTO, he could use less fuel. When gas prices became an issue in 2007 and 2008, he decided to use his experiences to launch a blog.

"I could feel the winds of change and only had to look back to my youth to know what to do."

With so many drivers on the road, he says small but consistent reductions in everyone's fuel expenditure would have a huge impact on overall energy consumption. Gray is skeptical that high-powered executives with fancy cars will ever want to abandon their wheels, but he says employers should look into telecommuting options for their employees.

He is one of the estimated 4 percent of people who work from home, according to 2008 U.S. Census Bureau numbers. The same study reported that more than 75 percent of U.S. workers drive to work alone and only about 11 percent carpool.

On his Web site, he evaluates cars' gas mileage. Special pages are devoted to the most efficient vehicles. All sorts of cars are examined, and he takes particular interest in hybrids, diesels and other vehicles claiming to be efficient while also looking at more traditional popular cars.

Gray says some people may not be able to avoid driving, but they could start using a lighter foot on the gas pedal to save some gas. Traveling at a steady speed and allowing reaction time helps conserve energy, he said.

He has found fuel efficiency gauges in some newer cars to be a godsend. The dashboard indicators tell drivers when they're driving in an efficient manner. Buying a car with a built-in sensor or installing an aftermarket gauge is one easy way for an ordinary person to save gas, he says.

At the dealership, Gray says car buyers should make miles per gallon a priority. He said he thinks Europeans have better access to cleaner cars than Americans do and encourages looking into fuel-efficient vehicles such as hybrids. Gray is a big proponent of clean diesel vehicles, which he says haven't gotten the attention they deserve. He also expressed hopes about alternative fuels made from algae and hydrogen.

"We're going to need them all," he said.

John Pucher, a professor of urban planning at Rutgers University, says the average American is using too much fuel, and many people have become almost "addicted" to their cars. He believes that driving less and finding alternative ways of getting around are in people's best self-interest and that selfish motivations are frequently overlooked in transit promotion.

Pucher, whose voicemail introduces him as "car-free John," hasn't owned a car since 1972. Also a New Jersey resident, he notes that transit options serve some areas extremely well and other areas not at all.

"The problem is all your transit is based on going to New York. If you want to go from suburb to suburb, you'll find that there are very little options."

He says he has noticed that people are often less likely to take public transit for leisure trips than for work commutes and adds many car trips are short enough to be walked.

He hopes that governments will take notice of individuals' desire to use other ways of getting around. A lot of money spent on cars, gas and maintenance could be used for other things, Pucher says, adding that using alternative forms of transportation forces people to get exercise.

Columnist and car reviewer Roman Mica of Boulder, Colorado, also said he thinks people will seek out alternative transportation and efficient vehicles if doing so is in their self-interest. He also hopes people will also try to set an example for others.

Mica makes video reviews of efficient vehicles and sometimes pits the cars against each other, because those are the cars he thinks his children will be driving years from now. He even goes after luxury cars. He posted a video on iReport.com examining a Lexus hybrid that bills itself as "the fastest hybrid in the world." iReport.com: Does the Lexus hybrid live up to the hype?

He loves cars -- such as the Prius he drives -- and especially loves new technology. He adds that environmental friendliness is part of a car's image.

"People buy cars because they're emotionally attached to them. You buy with your heart not your brain. You buy because of what the car says about you and who you want to be." iReport.com: Prius vs. Prius showdown

Like Gray, Mica works at home. This saves fuel on commutes, but other kinds of driving can be required. Outside of work, Mica tries to take public transit when he is traveling to Denver for events, ballgames and visits.

He says finding ways to use less of finite oil resources will help people save money in the long run and the market will probably encourage or support their increased use.

He is a proponent of energy-efficient vehicles and researches their carbon footprints on Web sites such as terrapass.com to estimate how they compare with standard cars.

Based on his experiences, he opines that driving a standard sedan is like driving two Priuses. Upgrading to a Ford F-150 is similar to putting three of the hybrids on the road. By considering one's carbon footprint in a car purchase and driving habits, he says, one person can make a big difference.

He says people should try to make small changes in how they drive because they can feel secure in knowing that they have made a small difference, but more importantly, they can set off a chain reaction among people they influence.

"It begins with one person," he said. "The government can mandate all it wants, but in the end, it comes down to personal choices and personal responsibility. You're making a difference because you believe that it starts with you and it ends with you, especially today when people are very frustrated with how little they can do to influence the government."