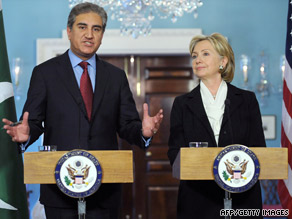 "The people of the region have to be assured that the United States has a long-term vision," Qureshi told reporters after his meeting on Tuesday in Washington. "Not just for Afghanistan and Pakistan but the entire region."

Qureshi wouldn't comment on the debate in Washington about whether the U.S. should send up to 40,000 more troops to Afghanistan or scale back the mission, with Qureshi calling it a judgment for "military commanders on the field."

He said that Pakistan has made great strides in combating terrorism on its soil, but still needed U.S. support, and he urged Washington not to abandon the region as it did after helping Afghan fighters drive Soviet troops from Afghanistan in 1989.

"You have to keep in mind history," he said. "The inconsistency of the past has to be kept in mind and we have to build on learning from the mistakes of the past."

Secretary Clinton said the U.S. and Pakistan enjoyed a "broad strategic partnership" which is "critically important for the security and prosperity of both of our nations."

"This is a commitment that we feel very strongly about and which we are evaluating to determine the best way forward to achieve the results and get the outcomes that we both share," Clinton told reporters.

Clinton and Defense Secretary Robert Gates, in a rare joint interview, said Monday that the United States is committed to a regional strategy to build long-standing relations with both Afghanistan and Pakistan.

"We're not leaving Afghanistan," Gates told CNN's Christiane Amanpour and former CNN Washington Bureau Chief Frank Sesno, "There should be no uncertainty in terms of our determination to remain in Afghanistan and to continue to build a relationship of partnership and trust with the Pakistanis. That's long term. That's a strategic objective of the United States."

Congress just passed an aid package for Pakistan worth $1.5 billion a year for the next five years to help combat extremism in the country and foster social and economic development.