NEW YORK (CNN) -- An activist exiled from Myanmar called for the government to release pro-democracy leader Aung San Suu Kyi and urged the U.S. to continue sanctions against it. 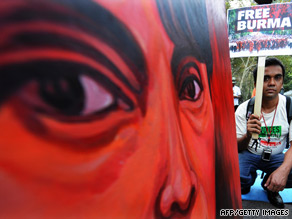 Protesters demand release of Aung San Suu Kyi in front of the United Nations in New York on Wednesday.

Thaung Htun, Myanmar's government-in-exile's unofficial representative to the United Nations, on Wednesday told CNN's Christiane Amanpour that "it is not the right time even to think about lifting sanctions." He wants the United States to continue to pressure Myanmar's military regime with economic sanctions as it pursues talks with the south Asian nation, also known as Burma.

Sanctions will continue, according to the Obama administration, but it noted that such a policy has not worked as a one-tiered strategy. Even as the United States has settled on moving toward diplomacy, detained leader Suu Kyi has called for lifting the sanctions.

Suu Kyi's detention has been a key component in the United States' political tangle with Myanmar.

Critics of the country's ruling junta have accused the regime of convicting Suu Kyi, 64, to keep her from participating in 2010 elections.

Sanctions coupled with diplomacy could be most effective in dealing with Myanmar, Htun said on the CNN interview program "Amanpour."

In advocating tougher sanctions, Htun said economic restrictions target the regime and do not affect the nation's people.

According to the CIA, more than 30 percent of Myanmar's population lives in poverty.

"The Burmese people are poor, and economy is getting worse because of the mismanagement of the regime," Htun said. "Actually, the regime is getting more money, you know, in the last 20 years. Now they are having $2.6 billion ... just from the sale of gas to Thailand, but they don't use that money for the people."

Others disagree on the effects of sanctions on the country's people.

Myanmar Prime Minister Gen. Thein Sein has called the sanctions "a form of violence" that do not "promote human rights and democracy."

Senator Jim Webb, the first congressman to visit Myanmar in a decade, said the U.S. State Department "has been clear that they're not going to move forward on issues like sanctions unless there are further reciprocal gestures.

"But we have seen the beginning of a removal of the paralysis," the Virginia Democrat said on "Amanpour" on Wednesday. "Aung San Suu Kyi has been able to meet twice now over the past week with government leaders."

But she is still detained and last week she lost the appeal of the 18-month sentence recently added to time she was already serving. She was sentenced in August for breaching the terms of her house arrest after an incident in May in which an uninvited American, John Yettaw, stayed at her home. Suu Kyi, a Nobel Peace Prize laureate, has been confined in her house for about 14 of the past 20 years.

Htun says it's too early to tell whether more talks with Myanmar will affect Suu Kyi's detention or how the regime treats political adversaries.

"If we look at the reality on the ground, there is no improvement," he said.

"There is more violence in the last seven months, more political prisoners, more arrests, and more military attacks in the ethnic minority areas. That's why we need to be very cautious and we need to put pressure on the regime until these benchmarks can be fulfilled by the regime."