King children resolve battle; 'We still always loved one another'

ATLANTA, Georgia (CNN) -- The three surviving children of civil rights leader Martin Luther King Jr. are moving forward after averting a public trial over the estates of their parents. 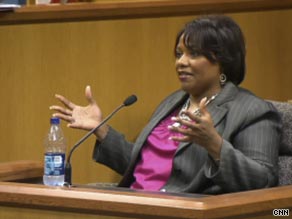 Bernice King and her brothers Martin Luther King III and Dexter King will split money they have been fighting over.

"We disagreed with each other, but we still always loved one another, and I think that's probably the most important factor," Martin Luther King III said.

Bernice King and Martin Luther King III sued Dexter King in July 2008, one month after accusing him of converting "substantial funds from the estate's financial account at Bank of America" for his own use, according to the lawsuit.

The lawsuit contended that Dexter King illegally and fraudulently converted estate funds and should be forced to repay the money and reimburse his siblings' legal costs. The document does not say how much he was accused of taking.

The suit also accused Dexter King of failing to provide timely accountings of their father's estate and said he hadn't given his siblings an accounting of finances in years.

Dexter King denied the accusations. He said shareholder meetings had not been held in the past few years because of family deaths that disrupted normal routines.

The Martin Luther King Jr. estate was also named as a defendant. Dexter King is the corporation's president and chief executive, in addition to being the estate's administrator.

The three children are the only shareholders in the corporation. Martin Luther King III and Bernice King hold 20 percent of its outstanding shares.

The two siblings also accused Dexter King of improperly removing money from the estate of their mother, Coretta Scott King, who died in 2006.

However, Superior Court Judge Ural D. Glanville determined that Dexter King was an authorized signatory on the checking account for his mother's estate, which is administered by Bernice King.

"There was no improper conduct with respect to the removal of funds from Mrs. King's estate," the court said in its order for summary judgment.

The judge ordered that money withdrawn be equally divided among the siblings.

"(It was a) very long day but also a very triumphant day in that we, as a family, I think, have amicably resolved our differences," Dexter King said.

"Families love each other. Families have disagreements," Bernice King said. "It doesn't mean as we go forward we will always agree because that would be a misnomer to say that."

The Kings have 14 days after the signing of Monday's settlement to each find three possible temporary custodians to manage the estate for at least one year. After the names are submitted to the court, the judge will make a choice, the settlement says.

According to the settlement, the appointment of a custodian will give the three children time to heal their relationship as siblings, to develop procedures for managing the corporation that oversees the Martin Luther King Jr. estate and to assure third parties "as to the validity and enforceability of any agreements."

One of the most bitter disagreements came over the private papers of Coretta Scott King. Dexter King accused his sister of withholding love letters between their parents that he wanted for a proposed $1.4 million book deal.

The judge ordered that Coretta Scott King's papers be brought to Freedom Hall at the Martin Luther King Jr. Center in Atlanta, Georgia, for temporary storage.