Official: Violence to some groups of women 'shocking' 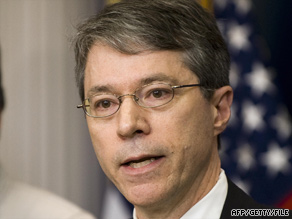 The Justice Department's second highest-ranking official told a gathering marking the 15th anniversary of the act's passage that poverty and lack of educational opportunities contribute to the scope of the problem and make it especially hard for these victims to escape abuse.

Ogden said that given the federal government's responsibility and its unique authority to prosecute serious crime on tribal lands, the Justice Department is intent on dealing with the issue.

Justice Department grants often provide the only funding for on-reservation domestic violence shelters and for victim advocates in tribal communities in 17 states.

Attorney General Eric Holder and Associate Attorney General Tom Perelli will join Ogden later this month for a meeting with tribal leaders to discuss public safety issues, including violence against these women.

Two tragic victims from affluent backgrounds told the Justice Department crowd that domestic abuse is not restricted to poor families.

One of the women -- a Harvard graduate -- said she first had been beaten by her Ivy League husband-to-be five days before their "fairytale" wedding but was unable to leave the physically abusive relationship for four years.

A second victim described how her ex-husband continued to threaten her despite court protective orders, until he finally shot her twice -- once in the face -- because she would not return home.

A new report by the Bureau of Justice Statistics released Monday said its victimization survey showed 652,000 incidents of overall violent crime inflicted by intimate partners in 2008.

Most of the incidents were classified as simple assaults, but there were 111,530 cases of aggravated assault, 44,000 rapes and sexual assaults and 38,820 robberies.

The number of homicides by intimate partners rose slightly in the past two years, while the cases of nonfatal intimate partner violence continued to decline, the Justice Department report said.