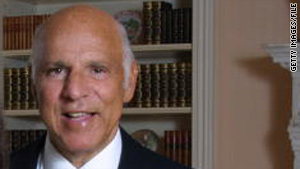 Jeffry Picower, 67, was found unconscious in his pool in Palm Beach. This photo was taken in 2002.
STORY HIGHLIGHTS
RELATED TOPICS

Jeffry Picower, 67, was found unconscious in his pool at his Palm Beach, Florida, home, Palm Beach police said. He was pronounced dead at a hospital. Police said they are investigating his death using "standard operating procedure in any drowning."

Picower invested with Madoff, who was convicted of operating a Ponzi scheme and defrauding thousands of investors. Madoff pleaded guilty in March to 11 counts, including fraud, money laundering and perjury, and was sentenced to 150 years in prison.

Prosecutors have said it was the largest investor fraud ever committed by a single person, totaling billions in losses to investors.

Picower's Picower Foundation of Palm Beach announced it was shutting down early this year because of Madoff losses, CNN Money reported. Picower's 2007 tax return valued its portfolio at $955 million.

But there were also suggestions that Picower benefited from Madoff's swindle. Citing an unnamed source, Fortune magazine said in April that Frank DiPascali, the chief lieutenant in Madoff's secretive investment business, was "prepared to testify that he manipulated phony returns on behalf of some key Madoff investors," including Picower.

Picower also allegedly "extracted billions of dollars from Madoff's fund before it collapsed," according to Forbes magazine.