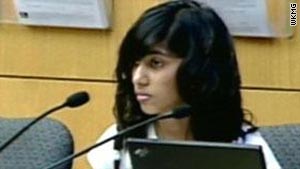 Rifqa Bary, who converted from Islam to Christianity, has been returned to her family in Ohio.
STORY HIGHLIGHTS
RELATED TOPICS

(CNN) -- A runaway teen who said her father threatened to kill her for converting from Islam to Christianity has been returned from Florida to Ohio, but not yet to her family, her mother's lawyer said Tuesday.

Rifqa Bary, 17, is in the custody of Franklin County Children Services while other issues in the case are settled, attorney Roger Weeden said.

"We're very happy that Rifqa is back where she should be, close to her parents," Weeden said. "The allegations of abuse and neglect were unfounded. Now some unification can begin."

A Florida judge ruled earlier this month in favor of her parents, Mohamed and Aysha Bary, who had requested that their daughter be transferred to Ohio.

The teen left her family in Columbus, Ohio, in July and took refuge in the home of a minister in Orlando, Florida. She was later moved into foster care after she said in an affidavit that her Muslim father had threatened her after finding out about her conversion. Her father has denied the allegation.

Judge Daniel Dawson, in his October 13 decision, said it was in Bary's best interest for her emergency custody case to continue in Ohio.

The transfer was delayed until the teen's immigration status was determined. Attorneys for the parents, who are from Sri Lanka, sent her immigration documents to the court within two weeks.

Her return to Ohio comes after months of legal wrangling, including the affidavit from the teenager claiming that her father was pressured by the family's mosque in Ohio to "deal with the situation," referring to her conversion.

In an earlier court filing, Rifqa Bary alleged that her father said, "If you have this Jesus in your heart, you are dead to me." The teenager claims her father added, "I will kill you."

Mohamed Bary, 47, has denied the accusations.

"We wouldn't do her harm," he said, saying he knew his daughter was involved with Christian organizations.

"I have no problem with her practicing any faith," Bary said, but acknowledged that he prefers that she practice Islam.

A report by the Florida Department of Law Enforcement says, "Our investigation has provided no clear evidence of criminal activity."

During a Florida court hearing, the teen periodically read a Bible, as did many of her supporters who filled the courtroom.

The supporters said they were disappointed by the ruling, but believe Jesus is with Bary no matter where she goes.