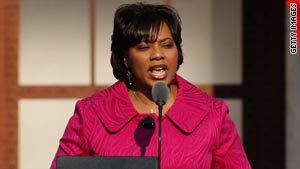 King's father was SCLC's first president. The organization was founded in 1957.

The other finalist for the post was former Arkansas Court of Appeals Judge Wendell Griffen, 57, who lost his recent bid for re-election.

King is a minister at New Birth Missionary Baptist Church in Lithonia, Georgia. She also is a motivational speaker and author.

"It is a destiny call," she told the Atlanta Journal-Constitution last week. "It is part of my father and mother's legacy and a continuation of the legacy he started in the '50s and '60s through this organization. I believe that the hand of God is leading me."

Her brother, Martin Luther King III, was president of SCLC from 1997 to 2004. They and sibling Dexter King were locked in a bitter legal battle over their parents' estates until late September, when a judge ordered them to begin negotiations. The three were able to reach a settlement.

King succeeds the Rev. Byron Clay, who has been interim president since the Rev. Charles Steele Jr. resigned earlier this year. The Rev. Joseph E. Lowery led the group from 1977 until 1997. The Rev. Ralph D. Abernathy was president from 1968 to 1977.

Ralph Luker, a retired history professor at Morehouse College and co-editor of the first two volumes of "The Papers of Martin Luther King," says SCLC's challenge going forward is giving the organization a sense of mission.

"There's been ... no real vision, and that's a dramatic change from its early years," he said. "For too long it's been a program here, had a cause there, but the group's rationale for being hasn't been clear."

The group, which has chapters and affiliates throughout the country, has lobbied extensively on a variety of issues related to civil rights.

CNN's Debra Krajnak and Maria White contributed to this report.