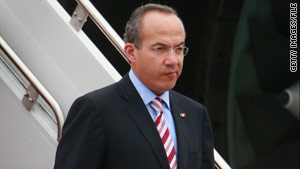 Saturday's extraditions put 2009's total at 100, breaking last year's record of 95, the Department of Justice said in a news release.

One tactic employed by the government of Mexican President Felipe Calderon in his offensive against drug cartels has been to increase extraditions of those facing charges in the United States.

Drug traffickers have been known to escape from Mexican prisons or to continue to operate inside them. Proponents of increased extraditions say U.S. prisons provide a more severe punishment.

Of the 11 people extradited Saturday, four were wanted on drug-related charges, the Department of Justice said.

The others faced charges of murder, sexual assault, robbery and other crimes. The 11 face charges in Texas, Florida, California, Maryland and the District of Columbia.

"Each year since 2001, Mexico has increased the number of defendants it extradites to the United States," U.S. Attorney General Eric Holder said in a statement. "By ensuring that alleged criminals are held accountable, we send a strong message that fleeing across the border does not mean you will escape justice."