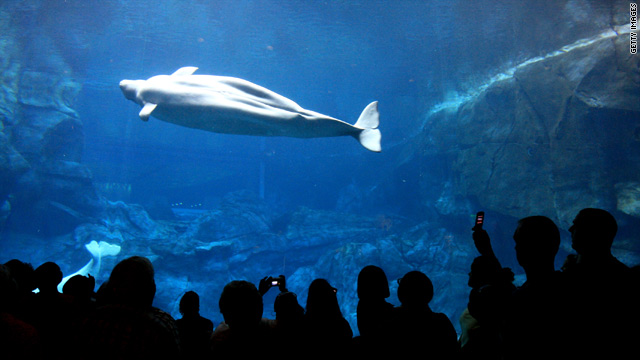 The beluga whales have been a major attraction at the Georgia Aquarium since it opened in 2004.
STORY HIGHLIGHTS

The exact cause of Nico's sudden death on Saturday is inconclusive from the initial necropsy or animal autopsy. The Georgia Aquarium hopes to find out more information in the months ahead from a more detailed necropsy.

"As we work with and care for the many animals at the Georgia Aquarium, we become attached emotionally," said Dr. Gregory D. Bossart, chief veterinary officer at the aquarium. "The loss is not unlike that of faithful dog or special horse that has been a part your life for years."

Nico died at Sea World in San Antonio, where he and two other beluga whales had been moved temporarily while the Georgia Aquarium is undergoing renovation. Nico was scheduled to return home to Atlanta next month with companions Maris and Natasha.

The loss is not unlike that of faithful dog or special horse that has been a part your life for years.
-- Dr. Gregory D. Bossart
RELATED TOPICS

Nico arrived in Atlanta with Gaspar, two whales obtained from a park in Mexico. Both animals suffered "significant health issues" from their times in a foreign park and were essentially "living on borrowed time," said Bossart, who had been caring for the two whales as far as nine years ago, while they were still in Mexico.

"We rescued Nico knowing that he had health issues due to his prior home, but we were confident that we could provide a better quality of life for his final years," Bossart said.

Gaspar was suffering from a bone disease contracted before arriving at the downtown Atlanta aquarium and was euthanized in January 2007. Another beluga whale, Marina, died 11 months later from complications of old age.

Beluga whales or white whales, whose name is derived from a Russian word meaning white, typically live in Arctic and sub-Arctic regions including Canada, Russia, Greenland and the U.S. state of Alaska. They can live up to 35 years.

The belugas are not the only high-profile deaths at the Georgia Aquarium, which opened in late 2005. A pair of whale sharks have also died at the eight-million-gallon facility, the only one outside Asia to display the giant fish.