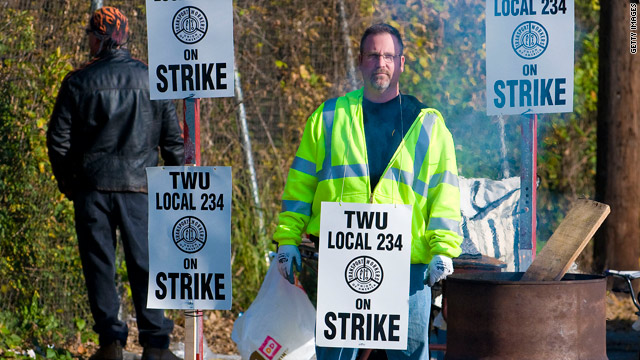 Transport Workers Union leaders walked out of contract talks just before midnight, saying they couldn't accept an offer from the Southeastern Pennsylvania Transportation Authority because of a shortfall in their pension fund and disagreements on some work rule issues.

Joe Casey, general manager of the transit authority, said the offer presented to workers was competitive. Are you stranded by the strike? Share your story

"For the life of me I can't believe the TWU walked away from that offer," he said.

The strike means all buses, subways and trolleys in Philadelphia and on the Frontier line in Bucks and Montgomery counties stopped running at 3 a.m.

One train operator was as surprised as customers to discover the strike had begun.

"I'm like everybody else," he said. "The only way I found out was when I went to the station and the gates were locked."

Commuters weren't taking it well. Comments on the Web site of CNN affiliate WPVI-TV were anti-strike by a ratio of 9 to 1 on Tuesday.

"These guys need to take a look around and see that we're facing 10 percent unemployment and an economy on the brink of collapse," Lee Henderson commented to the Web site. "They should be grateful for good jobs and go back to work without further delay." Henderson commutes from Elkins Park, on the northern edge of Philadelphia.

But a city resident who only gave his first name, Gary, backed the union.

"Local 234 is standing up for the union members; Philadelphia is a union city," he commented. "Local 234 is just expressing its rights. Septa always pulls the economy into negotiations, but when it comes to their managers getting paid, they get what they want."

Concern about crowds converging in downtown Philadelphia for the World Series surfaced in talks over the weekend and workers agreed to stave off the strike. But not long after the last out in Game 5 and the series heading back to New York, Local 234 went on the picket line.

The transit authority urged riders to check its Web site for contingency plans.