The bugler's final 'thank you' 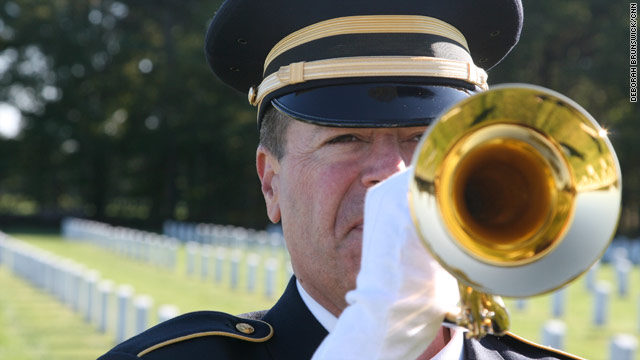 As the sole bugler for the southern region of New York's Military Forces Honor Guard -- part of the state National Guard -- DiLeo travels five days a week from cemetery to cemetery, playing at funerals of military servicemen and women and veterans. He started three years ago and hasn't missed a day since.

For DiLeo, playing taps at the funerals of men and women who served the country holds significant meaning.

"It's an honor and a privilege to help bring closure to a family and help honor the veterans who have paid a price for me to be able to enjoy the fruits of this country," he said. "To come out everyday and play taps and say thank you is a very small price."

Taps has been played at military funerals since some time during the Civil War, according to the U.S. Department of Veteran Affairs. It was written by Maj. Gen. Daniel Butterfield in July 1862 as a revision to the bugle call signaling "lights out," which Butterfield felt was too formal to note the day's end. By 1891, Army regulations required taps to be played at military funerals.

Aware that there was a shortage of buglers because of the large number of funerals a day, DiLeo contacted the military about bugling after he attended his godfather's funeral, where a recording of taps was played.

About 1,800 veterans die each day, most of them from World War II, according to the VA. Because the military cannot provide enough buglers to play at such a large number of funerals, Congress passed a law in 2000 to allow a recorded version to be played.

DiLeo said he has made it his mission to eliminate the recording -- and honor the families and service of veterans -- by playing taps at as many funerals he can attend. The most he's ever done in one day is 26.

"Every veteran has the right to get military honors, and taps, in my opinion, should be played live as opposed to having a recording," DiLeo said.

His passion seems to have struck a chord with veterans and other honor guard members.

"Hearing it live sends a more heartfelt symbol that we actually do care about that soldier, that we're actually there for him," said Spc. Orville Porter of the New York honor guard. "With Mr. DiLeo, you hear the feeling, you hear every note. With a recording, it's just very bland."

For a professional trumpet player like DiLeo, taps is technically an easy song to play.

"It's sort of like asking a concert pianist to play 'Chopsticks,' " he said. "But at the time it needs to be played, when emotions are running high, it's probably one of the most difficult things to play."

Very often, DiLeo hears sobs or wails from people at the funeral while he's playing; he's even seen widows collapse as he's sounded his first note. To get through it, he tries to only concentrate on the music.

"A lot of times, I have to close my eyes and just pay attention to what I'm doing and just think of it musically, because if I get too emotionally involved in it, I could get to the point where I couldn't play," DiLeo said.

DiLeo has played his bugle for more than 3,000 veterans and active duty servicemen and women and has no plans to stop.