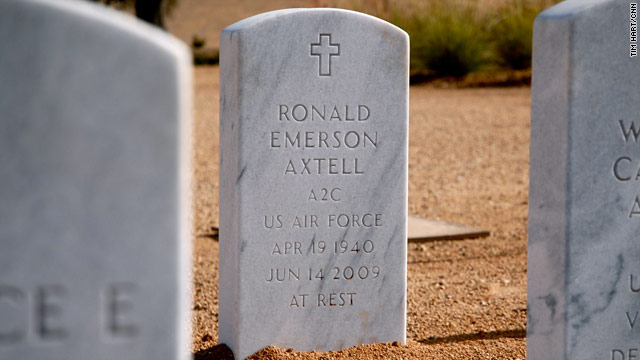 Bakersfield, California (CNN) -- When Vincent Barrett died alone in July at age 72, the coroner's office could not find any next of kin.

Similarly, Ronald Axtell was listed as indigent -- no survivors and no funds for a funeral -- when he died at age 69.

And yet a small army of men and women gathered to pay their respects to the two men, both Air Force veterans, as they were buried at Bakersfield National Cemetery in September.

Marsha Dickey, who works in the Kern County coroner's office, was instrumental in making sure the men got the honors they deserved.

"She worked very hard to see that they were veterans ... and without that ... we probably would not be here today to honor them," said Lynn Sprayberry, founder and chairwoman of Friends of Fallen Heroes, a local organization that makes sure veterans receive a respectful service at Bakersfield National Cemetery.

The coroner's office also discovered that Barrett, a former staff sergeant, had been awarded the Purple Heart for wounds received in Korea. Axtell was a former airman second class.

Leon Thomas, who served in the U.S. Army in Korea in 1951 and was awarded the Purple Heart and a Bronze Star medal for bravery, helped spread the word about the double funeral.

"The folks at the coroner's office are patriotic Americans," Thomas said. "We got on the phone and on the Internet and invited our friends."

News of the funeral even made the local paper.

"I really didn't know there would be this many people to come out," Sprayberry said.

And come they did, civilians and veterans. An awning built to shade mourners from the hot San Joaquin Valley sun was not big enough to cover everyone. A few brought umbrellas for shade. Many held American flags, some small and some very large and carried on poles.

Some brought flowers; one vet held a few yellow roses; another left a bouquet of red, white and blue flowers with a simple message printed on a white ribbon: "Thank you."

When the honor guard approached with Barrett's flag-draped casket, civilians put their hands over their hearts. The veterans -- some wearing motorcycle leather and bandanas, some sport shirts and slacks, others donning the suit jackets and pea caps favored by the Veterans of Foreign Wars -- stood at attention and snapped crisp salutes.

They saluted again when the honor guard fired three volleys of seven shots and when the lone bugler played taps.

As the guard tightly folded the flag that draped Barrett's casket, a woman in her 20s took cell phone video with one hand and wiped tears with the other.

Barrett's ceremony was brief, not much longer than 10 minutes. Axtell's ceremony started shortly after, his ashes carried by the honor guard in a small wooden box. It lasted about as long as the first, with the same volley of shots, taps and salutes.

In the minutes between services, cemetery director Jones asked the crowd whether there were "any family representatives here for Mr. Axtell?"

No one came forward.

"There were 125, give or take, people here who had no idea who ... Barrett or Axtell were," Jones said. "They didn't know if they were African-American, Hispanic, Caucasian. They didn't even know they were in the Air Force. But they were here."

"They're patriotic Americans, and they showed up," Thomas added.

"I knew their names and their rank, and that's all I knew," Sprayberry said. "And yet, I was here, and I was very proud to be here, and spend a little time saying goodbye. ... Nobody deserves to be laid to rest alone, especially for fighting for their country, and ... they deserve the respect."

Bakersfield National Cemetery is far different than any county facility where the indigent would be interred. In the arid foothills of California, their upright headstones will stand in a field of decomposed granite instead of grass, joining about 250 others in an orderly formation. The granite is raked daily, giving the new cemetery a Zen garden look amid the rolling hills and century-old oak trees.

Axtell and Barrett's cases should not be unusual, Jones said. "They're veterans. And because they are veterans, they're entitled to be here, and we honor them the very best way we can."

"I think we're going to see more ... people identified as veterans from the ranks of the indigent," Thomas said. "They should be honored in a fitting way, like we honored these two today."

Between Barrett and Axtell's services, Youngblood addressed the crowd: "Because you may be indigent, it doesn't make you inconsequential. They served our country, and you're paying them a great tribute by being here."