'It's never too late to say thank you,' Obama tells veterans 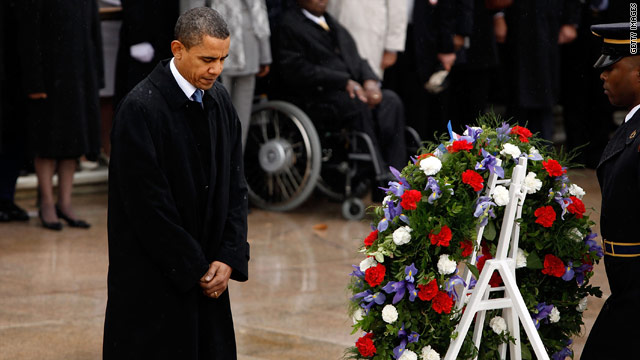 President Obama laid a wreath at the Tomb of the Unknowns on Wednesday.
STORY HIGHLIGHTS

Washington (CNN) -- President Obama paid tribute Wednesday to those who have lost their lives in the nation's wars as well as to the men and women who currently serve.

"There's no tribute, no commemoration, no praise that can truly match the magnitude of your service and your sacrifice," he said in a speech at Arlington National Cemetery on a rainy, overcast Veterans Day.

"We call this a holiday, but for many veterans, it's another day of memories that drive them to live their lives each day as best as they possibly can," he said.

He vowed that "America will do right" by its troops.

"To all who served in every battle in every war, we say that it's never too late to say thank you."

Earlier Wednesday, the president and first lady Michelle Obama also walked through Section 60 of Arlington National Cemetery, CNN's Jill Dougherty reported. The section is where service members from the wars in Iraq and Afghanistan are buried.

There, the Obamas stopped to talked to relatives and friends of those who have died.

Skip and Rhonda Rollins of New Hampshire were visiting the gravesite of their son, Justin, who was killed in Iraq in 2007.

He would have turned 25 on Tuesday.

The couple said they were "extremely surprised" to see Obama "take the time to speak with the families" in Section 60. Although he said he generally holds different political views from those of the president, Skip Rollins said that supporting American soldiers, both living and dead, "should always be a nonpartisan issue."

He added, "It was extremely nice of him to take this time out to come down here and do this."

The couple said they make the trip to their son's grave each year around this time for their son's birthday and for Veterans Day.

"It's not just my son that I mourn for; when I see all the others' stones, the ages of the soldiers, and you know they've given the ultimate sacrifice for all of us. And you know it's hard for me to leave, to leave my son," Rhonda Rollins said.

Earlier Wednesday, the president laid a wreath at the Tomb of the Unknowns in the cemetery. He then stood solemnly as a bugle played taps. Some onlookers watched from under umbrellas.

Veterans Day comes a day after Obama addressed 15,000 people at a memorial service at Fort Hood Army Post, where 13 people were killed and dozens more were wounded in a shooting last week.

The president told the families of those killed that "no words can fill the void that has been left," adding, "your loved ones endure through the life of our nation."

The suspected gunman in the attack is a 39-year-old Army psychiatrist, Maj. Nidal Malik Hasan, who remains in intensive care at an Army hospital in San Antonio, Texas.

Other nations honored those who sacrificed their lives in wars on Wednesday, in many cases for the first time without any surviving veterans of World War I.

Services took place around the world to mark the 91st anniversary of the armistice signed between Germany and the Allies on November 11, 1918.

Depending on where it is celebrated, the day is known as Armistice Day, Remembrance Day, Poppy Day or Veterans Day.

Australians observed one minute silence at 11 a.m. in memory of those who died or suffered in all of the nation's wars and armed conflicts.

"Their loss is a reminder that there is nothing glorious about war. Those called upon to fight know that better than anyone," said Gen. Peter Cosgrove, chairman of the Council of the Australian War Memorial.