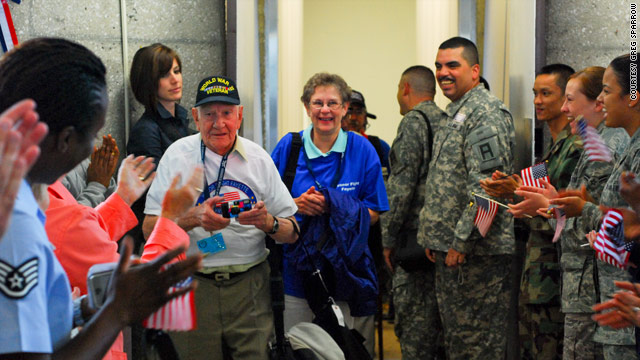 A World War II veteran is greeted in Washington en route to the memorial.
STORY HIGHLIGHTS

Washington (CNN) -- The aging veterans gingerly walk from the plane in the nation's capital. Some get pushed in wheelchairs. A brass band strikes up World War II era tunes. Strangers rise to their feet and clap their hands.

Walter Victor was overwhelmed as he made his way through the crowd. "The chills came over me. Very seldom do you see something like that," says the 92-year-old army veteran.

These World War II veterans have traveled here to visit the National World War II Memorial, which honors the 16 million U.S. armed forces who served and the more than 400,000 who died in battle.

The vets made the trip thanks to a former employee at the Department of Veterans Affairs. A physician's assistant at the VA in Springfield, Ohio, Earl Morse was struck by the WWII vets he treated and how few made the journey to see the memorial that honors them.

"They dedicated the WWII memorial in May of 2004, 60 years after the war had ended. That was a cause of celebration in my clinic. All of the veterans wanted to see it but they were in poor health or didn't have the means to visit it."

"Reality set in," Morse says, "they were never going to see their memorial."

Morse was determined to change that, because he so admired the quiet grit and heroism of the unassuming men he treated every day. He took his cause to a local air club. "I stood before 150 pilots and told them I was going to start flying WWII veterans to Washington. I said if you want to help me, the WWII veteran doesn't pay a penny. You'll have to rent an airplane and cover all the travel costs."

"Honor Flight" took to the skies in May of 2005. Six planes flew 12 veterans. The next month, eight planes flew 16 veterans. Today, it operates like a volunteer airline, with 86 hubs in 33 states.

Instead of renting small planes, they charter Boeing jets, thanks to donations that keep the planes in the sky. So far, more than 30,000 veterans have experienced a visit to the memorial, courtesy of Honor Flight.

"Witnessing their emotions is what fuels our cause. When you see WWII veterans break down in tears because they had no idea how much this nation reveres, cherishes and loves them for what they've done, it really overwhelms them," Morse says.

In the days and weeks before each Honor Flight, an army of ground volunteers coordinates every detail of each trip -- from the buses that pick them up to the meals they eat.

Shortly after Bales and his group arrived in Washington this day, they were taken by bus to the memorial. Many said they were stunned by its size and scope. Inscriptions carved in granite recognize specific battles that were fought in Europe and across the Pacific.

A wall of stars marks the high price of freedom. They paused to remember the 448,000 who died in the war -- and their fellow survivors who didn't live to see this moment.

"Each of those stars represents 100 men and women who died in WWII, and I realized that my division has almost 39 stars on that wall," said Tom Rone, 85, who stormed the bullet-ridden beaches on Guadalcanal as a platoon sergeant with the Marines.

Morse says the trip often provides closure for the vets who visit. Many veterans open up at the memorial and speak in detail for the first time about what they went through.

"I've had exchanges with veterans that are jaw dropping," Morse says. "You can't fathom what it's like to have experienced what they went through fighting for their lives."

The same "Honor Flight" that transported the veterans to Washington returns them back home, landing just 12 hours after it took off. The elderly warriors seem renewed rather than exhausted by their whirlwind trip.

"I will never forget this," say 86-year-old Marcus Lee Long, who served in the Pacific on the USS Ellet. "Everybody is so happy and treating us so nice."

For Morse, the founder of Honor Flight, the end of each flight is a bittersweet experience. His mission continues with an air of urgency, because less than 10 percent of the Americans who served in World War II are still alive. An estimated 1,200 WWII veterans die every day.

"In another five to seven years, our efforts will be a moot point because they will be gone or too infirm to participate in a mission like this," he says.