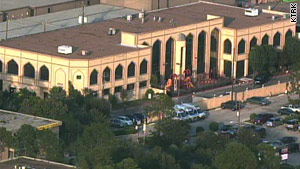 The U.S. government seeks forfeiture of four mosques, including this one in Houston, Texas.
STORY HIGHLIGHTS
RELATED TOPICS

New York (CNN) -- A leading Muslim-American group lashed out at the federal government Friday for moving to seize assets -- including four mosques -- that belong to a foundation and a corporation believed linked to Iran.

"The American Muslim and faith communities must not allow houses of worship to become pawns in geopolitical struggles," said Imam Mahdi Bray, executive director of the Muslim American Society's Freedom Foundation. "The tension between the United States and Iran must not be played out in the mosques of America."

Federal prosecutors say their actions against assets belonging to the Alavi Foundation and the Assa Corp., which also include a Manhattan skyscraper, are not an effort to target mosques.

"There are no allegations of any wrongdoing on the part of any of these tenants or occupants," said Yusill Scribner, a spokesman for the U.S. Attorney's Office for the Southern District of New York in a written statement Thursday. "The tenants and occupants remain free to use the properties as they have before today's filing."

A senior Justice Department official told reporters that the government is moving against the Iranian landlords of the buildings, not seizing mosques as religious-oriented facilities. The mosques -- in New York, Maryland, California and Texas -- just happen to be among the tenants of the buildings in question, the official said.

But the Muslim American Society's Freedom Foundation called the actions an "unprecedented encroachment of religious freedom."

The group said "it is an abiding concern among the American Muslim community that this action is just the beginning of a backlash after last week's Fort Hood shooting tragedy." A Muslim-American soldier is accused in a Fort Hood, Texas, shooting spree that left 13 people dead and dozens injured.

The Council on American-Islamic Relations, another leading Muslim-American group, issued a statement Thursday saying the government's actions may have First Amendment implications.

"Whatever the details of the government's case against the owners of the mosques, as a civil rights organization we are concerned that the seizure of American houses of worship could have a chilling effect on the religious freedom of citizens of all faiths and may send a negative message to Muslims worldwide," said Ibrahim Hooper, the national communications director for the council.

The controversy erupted after prosecutors in New York filed an amended civil complaint seeking forfeiture of all assets of the Alavi Foundation and Assa Corp. They include properties owned by the foundation in several states.

A 36-story office tower in midtown Manhattan is owned by the 650 Fifth Avenue Company, a partnership between Alavi and Assa, the Justice Department said.

Prosecutors allege the properties at issue were "involved in and [were] the proceeds of money laundering offenses," and that the owners violated the International Emergency Economic Powers Act, executive orders and U.S. Department of Treasury regulations.

"As today's complaint alleges in great detail, the Alavi Foundation has effectively been a front for the government of Iran," Preet Bharara, U.S. attorney for the Southern District of New York, said on Thursday. "For two decades, the Alavi Foundation's affairs have been directed by various Iranian officials, including Iranian ambassadors to the United Nations, in violation of a series of American laws. The Alavi Foundation's former president remains under investigation for alleged obstruction of justice, and both the criminal and civil investigations are ongoing."

John Winter, a New York lawyer representing the Alavi Foundation, said his client would challenge the complaint. "We're obviously disappointed that the government brought this action because we have been cooperating with the government since this investigation began about a year ago and we intend to litigate this matter," he said.

"It may take some time, but at the end of this litigation, we're of the mind that we're going to prevail here."

The buildings remained open and were continuing to operate as usual.

When a CNN reporter arrived at one of the seized mosques -- in Queens, a New York City borough -- he found it to be operating normally. There was a copy of the federal complaint taped to the front door of the building, but the doors were open and people were coming and going.

Calls to the Iranian Mission for comment were not immediately returned.

A report Friday on the Web site of Iran's state-run Press TV did not contain any responses from Iranian officials.