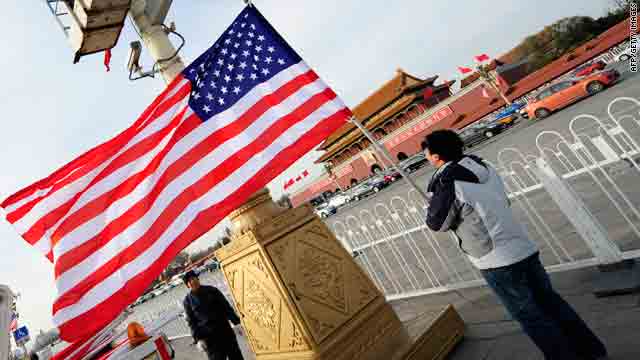 Washington (CNN) -- Americans are split over whether China represents a military threat to the United States -- but there is no doubt in the public's mind that the country poses an economic threat, according to a new national poll.

According to a CNN/Opinion Research Corporation survey released Monday, 51 percent of the public consider China a military threat, with 47 percent disagreeing. That 4-point margin is within the poll's 4.5 percent sampling error.

The poll's release coincides with U.S. President Barack Obama's first visit to China to bolster relations. At a town hall meeting on Monday he made the case to Chinese students that the two countries' philosophical differences should not get in the way of a robust relationship.

According to the survey, two-thirds see China as a source of unfair competition for U.S. companies, while only a quarter are more likely to view China as a huge potential market for U.S. goods.

"That may be why 71 percent of Americans consider China an economic threat to the U.S.," says CNN Polling Director Keating Holland. "Americans tend to view foreign countries as competition, and China is no exception."

Only a quarter of those questioned in the poll say that China has a good track record on human rights. Sixty-eight percent suggested that China is doing a bad job respecting the human rights of its citizens.