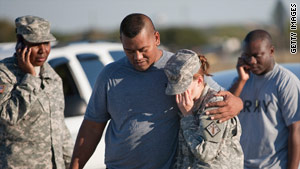 Washington (CNN) -- A majority of Americans think that authorities could have prevented the deadly attack at Fort Hood, Texas, according to a new national poll.

A CNN/Opinion Research Corporation survey indicates that 64 percent of the public think that federal law enforcement agencies or the U.S. military should have been able to prevent the shootings, with 31 percent saying the incident couldn't have been prevented.

"All major demographic groups seem to believe that the attack at Fort Hood was preventable," said CNN polling director Keating Holland. "A majority of men and women, old and young, Democrats and Republicans all think Hasan could have been stopped."

The poll's Thursday morning release comes as Sen. Joseph Lieberman, chair of the Senate Homeland Security Committee, is scheduled to begin hearings focusing on what authorities knew about the alleged shooter before the November 5 incident, and whether military or law enforcement authorities missed signals that Hasan was planning an attack.

According to the survey, Americans are split on whether the attack was an act of terrorism. Forty-seven percent of people questioned say it was terrorism, with 45 percent disagreeing.

The CNN/Opinion Research Corporation poll was conducted November 13-15, with 1,014 adult Americans questioned by telephone. The survey's sampling error is plus or minus 4.5 percentage points.