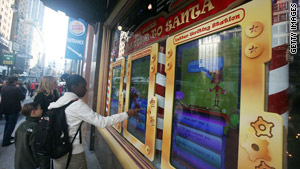 Overall, as many as 134 million people said they will shop the days following Thanksgiving, according to the survey.
STORY HIGHLIGHTS

New York (CNNMoney.com) -- Black Friday shopping is expected to pick up more than 16 percent this year, according to a survey released Tuesday.

Fifty-seven million people said they will definitely head to stores this year, up from 49 million in 2008, according to a survey by the National Retail Federation.

An additional 77 million said they will wait to decide after seeing the weekend deals.

They could be persuaded, according to Retail Federation President Tracy Mullin.

"Regardless of what we've already seen these last few weeks in terms of promotions, retailers still have a few tricks up their sleeves to excite Black Friday shoppers," Mullin said in a statement. "Americans can expect huge sales on popular items like toys, electronics and apparel."

Overall, as many as 134 million people said they will shop on the Friday, Saturday or Sunday after Thanksgiving, up 6 percent from 128 million people the previous year.

The survey said 66.3 percent of consumers said they will head to department stores and 62.4 percent to big box stores on the day that kicks off the holiday shopping season. Forty-one percent will shop at electronic stores, 36.3 percent at clothing stores and 28.8 percent at grocery stores. With increased cyber deals from retailers, 27.6 percent of those surveyed said they will shop online.

Some stores are extending hours on Black Friday so consumers have more time to shop for "doorbuster" deals.

Toys R Us announced last week that it will open at midnight on Thanksgiving and offer deals 70 deals then and 50 more doorbuster deals at 5 a.m.

Walmart also said its 810 stores that are not already open 24-hours will pull all-nighters for Black Friday.