For 9/11 families, finishing job in Afghanistan is personal 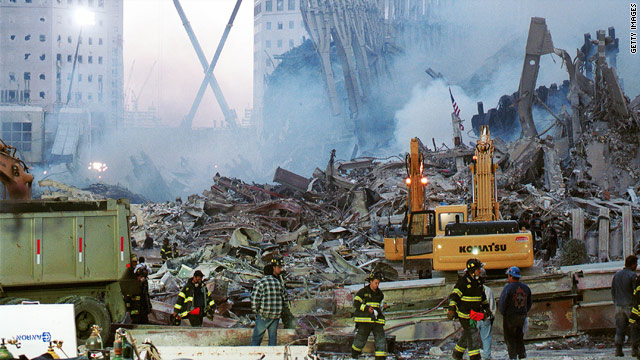 Joe Daniels, the head of the 9/11 memorial, says the nation must not get complacent: "The history of 9/11 is still being written."
STORY HIGHLIGHTS

Hillary Clinton gives her first interview since President Obama's announcement on sending more troops to Afghanistan. John Roberts goes one-on-one with the secretary of state to learn how Clinton plans to get more NATO support. Tune in to "American Morning" at 6 a.m. ET Friday, live from Brussels, Belgium.

(CNN) -- When Charles Wolf watched President Obama's speech on Afghanistan, he nearly broke down in tears. He doesn't have a son or daughter headed off to war. But to him, his wife of 12 years was a war casualty: She was killed on September 11.

When Obama described the attacks "and he described how the whole world was with us, it emotionally took me right back to that moment," Wolf said. "It was all I could do to keep from totally losing it."

Wolf's wife, Katherine, worked as an executive assistant for Marsh & McLennan on the 97th floor of the North Tower of the World Trade Center's Twin Towers. She sent an e-mail just two minutes before the first plane hit.

"Her office took a direct hit by the plane, and she was vaporized. There was nothing ever found of her," Wolf said.

It's been eight years since the attacks of September 11 killed 2,976 people. A lot of memories have faded, Wolf said, but he still thinks of the little things: "holding her hand, falling asleep next to her, waking up next to her, the companionship, the partnership."

And so Wolf was glued to his television Tuesday for Obama's speech. He wanted to hear from the president how the nation is going to finish the job in what Wolf calls "the womb of 9/11."

"To address these issues," Obama said, "it is important to recall why America and our allies were compelled to fight a war in Afghanistan in the first place. We did not ask for this fight. On September 11, 2001, 19 men hijacked four airplanes and used them to murder nearly 3,000 people.

"They struck at our military and economic nerve centers. They took the lives of innocent men, women and children without regard to their faith or race or station. Were it not for the heroic actions of the passengers on board one of those flights, they could have also struck at one of the great symbols of our democracy in Washington and killed many more."

Those words brought it all home: the memories of his wife with the beautiful smile and short-cropped red hair. "I was biting my lip," he said.

That said, Wolf is critical of the president's strategy, mostly his announcement to begin withdrawing the American contingent in July 2011.

"That is a tactical and strategic mistake," he said. "If you're playing chess, do you tell your opponent your next move?

"To broadcast that for the sake of politics, to me, that is very wrong."

And so he was divided: pleased about the renewed commitment to the Afghanistan war but upset by the planned pullout date.

"I support President Obama's decision to send more troops to Afghanistan and the war against al Qaeda and the Taliban," he said.

This is a war of necessity.
--Charles Wolf
RELATED TOPICS

A combat veteran of Vietnam, Ielpi added, "The president and Congress need to ensure America has a clear strategy for our military in order to not repeat the strategic mistakes of Vietnam. I also strongly believe our country needs to do more to support returning veterans."

The office of Joe Daniels overlooks ground zero, an every-day reminder of what happened on September 11, 2001. He was standing outside the Twin Towers when they were hit. Daniels is now the president of the National September 11 Memorial & Museum, charged with the monumental task of building a living tribute to those who perished that day.

"In the aftermath of 9/11, there were a lot of citizens who signed up to do what they felt was a patriotic duty to respond to what happened, and many of them went to Afghanistan," Daniels said. "So I think it's important that we don't forget that the history of 9/11 is still being written. There are still a lot of important things that have to be done in Afghanistan."

He added, "After the 1993 bombing of the World Trade Center, we lapsed into complacency. And to have a focus on finishing what needs to be done, I think, is important. We can't fall back into that sense of isolation and complacency."

Wolf agreed. By returning in force to Afghanistan, he said, "We are going in now to keep ourselves from being attacked again.

"This is not a war of choice," Wolf said. "This is a war of necessity."

He hopes the American people understand that. It's why he can hardly speak when he sees U.S. soldiers in uniform. "I am so grateful of the fact that they will lay their lives on the line for us," he said.

For military families who will soon send their loved ones off to Afghanistan, Wolf said, "Thank you. It's all you can say. Thank you for making the decision to do it. Thank you for loving your country."

"I just ask every person out there if it was your wife who went to work one day and never came home," he said, "would you do anything to make sure it doesn't happen again?"

Wolf paused at the end of the conversation and said simply: "We have to remember 9/11."