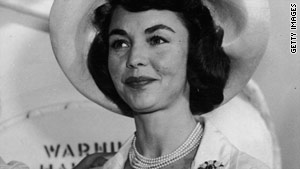 (CNN) -- Jennifer Jones
Nominated for five Academy Awards, actress Jennifer Jones died Thursday at 90. Her first major movie was "The Song of Bernadette" in 1943. Her portrayal of Bernadette Soubirous, a peasant girl in 19th-century France who had visions of the Virgin Mary at Lourdes, won her the best actress Oscar. She also earned Oscar nominations for "Since You Went Away" in 1944, "Love Letters" in 1945, "Duel in the Sun" in 1946 and "Love Is a Many-Splendored Thing" in 1955 in which she co-starred with William Holden. She was born Phylis Lee Isley in Tulsa, Oklahoma, and later changed her name to Jennifer Jones in the early 1940s after a screen test for legendary producer David O. Selznick, whom she later married. Her last film appearance was a cameo role in the 1974 star-studded disaster movie "The Towering Inferno."

Shellie Ross
The Florida mom and blogger posted the Twitter message on Monday night: "Please pray like never before, my 2 yr old fell in the pool," as she waited in a hospital to find out how Bryson was doing. Her succinct plea went to more than 5,300 recipients who follow her digital thoughts. According to USA Today, her son died 19 minutes after the tweet, which has now resulted in a viral torrent of support and criticism.

Mark Weinberger
The doctor from Merrillville, Indiana, disappeared more than five years ago. He was arrested this week while camping in northern Italy and was in custody at a hospital as he recovers from a wound that occurred when he tried to take his own life, Britain's The Guardian reports. A federal grand jury indicted Weinberger in 2006, accusing him of fraud and malpractice, according to Indiana's Post-Tribune. His wife, Michelle Kramer, told Larry King in August 2005 that they had been vacationing in Mykonos, Greece, and she woke up to find him gone. She has since filed for divorce.

Post-Tribune: Feds wait for return of fugitive doctor to U.S.

The Guardian: Doctor found living in tent on Mont Blanc

Kurt Muse
The U.S. Army is marking the 20th anniversary of the rescue of American Kurt Muse at the beginning of the military action that deposed Panamanian leader Manuel Noriega. The Noriega regime reportedly held Muse in prison for nine months for operating an underground radio station, Voice of Liberty. In 1989, he was captured and put in solitary confinement -- until the elite Delta Force conducted a dramatic prison rescue. During the operation, the Hughes MH-6 Little Bird helicopter transporting Muse crashed, but he was not badly injured, a report says. Muse is now an author and a motivational speaker.

Nicholas Coke
The baby from Pueblo, Colorado, was born without a brain. This week, he had his first birthday. KOAA-TV in Colorado Springs-Pueblo reports that Nicholas was born with anencephaly, a birth defect in which all or part of the brain is lacking. Most such babies die within hours. His mom, Sheena, told KOAA, "He can't see, he can't hear, he can't suck. He doesn't crawl, doesn't sit up."

But every day there are a number of people who become fascinating to us -- by virtue of their character, how they reached their decision, how they behaved under pressure or because of the remarkable circumstances surrounding the event they are involved in.

They arouse our curiosity. We hear about them and want to know more. What they have done or said stimulates conversations across the country. At times, there is even a mystery about them. What they have done may be unique, heroic, cowardly or ghastly, but they capture our imaginations. We want to know what makes them tick, why they believe what they do and why they did what they did. They intrigue us.