Velshi: Too early to know if jobs market is improving 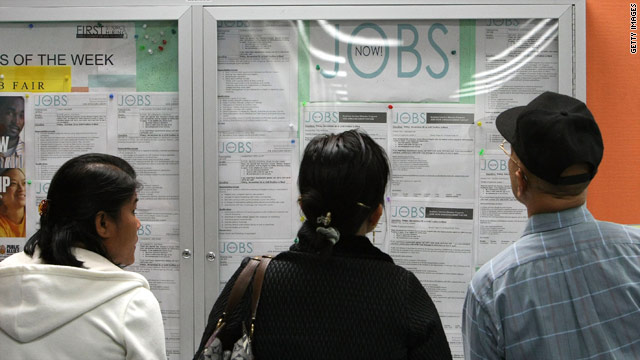 (CNN) -- Earlier this month, in an unexpected bit of good news, a Labor Department report showed a decline of just 11,000 jobs for November, far below any of the job losses posted over the last 23 months.

The unemployment rate improved slightly to 10 percent from 10.2 percent.

So, is the job market getting better? Was the bit of good news that unexpectedly emerged earlier this month the beginnings of a recovery or an anomaly? And what are the caveats to these types of statistics?

During a conversation earlier this week with Ali Velshi, CNN's chief business correspondent, who was traveling through the Carolinas and Georgia on assignment, we got some answers.

CNN: What should we make of the job loss number that came out a couple of weeks ago?

Velshi: The job loss number for November was actually quite remarkable. It was a much lower number than we were anticipating. Now, keep in mind, two things happened. The unemployment rate went down and I would almost discount that because it is not as good an indicator of the economy as the actual number of jobs lost or gained in a month.

Economists will tell you that in a healthy U.S. economy, we need to be adding at least 100,000 jobs a month just to keep up with the growth in the working-age population. So, we're clearly nowhere close to where we should be. We are very far from where we were a year ago, where we were seeing hundreds of thousands of jobs lost each month.

It's a good very sign, but obviously we'll have to wait until the December numbers come out in the first week of January to get a sense of whether [the most recent numbers] were the beginning of a trend or an anomaly.

CNN: These numbers are adjusted usually some time after they first come out. Why does that happen and how should we understand this number with that in mind?

Velshi: This is a number that comes out for an entire month on the first Friday of the next month. It's a very quick calculation and as is often the case with large numbers, there are amendments to that. Typically, for two full months after a jobless number comes out, it gets changed and updated. Even accounting for that, this was a very, very low job loss number.

There is another calculation number and that is that the unemployment rate -- the 10 percent -- that counts people who are looking for jobs and still receiving unemployment benefits. Once you stop doing those two things, you fall off the measurement.

So, the fact that the unemployment rate went down, it doesn't actually mean fewer people are unemployed. It just means that fewer people fit into the government's definition.

CNN: How should we understand these numbers with that caveat in mind?

Number one, that is very serious. And, number two, from a long-term perspective, this is highly problematic. A lot of workers who are put out of work tend to be in manufacturing work, which isn't likely to be coming back any time soon.

While the economy can start to come back and jobs can started to be created, all jobs are not the same, which means that the jobs that have been lost by the millions of people who manufacture things in factory, they may not be coming.

So, how do you employ those people? What jobs will there be for those people? Can they be retrained or relocated? That is a sign of an underlying labor shift that we are going to have to deal with.

CNN: In regard to the ongoing conversation on lending, banks and jobs, why should someone who doesn't have a job or run a small business care about these big Wall Street banks?

Velshi: The fact is, the biggest lenders to small business tend to be the larger banks. We're talking about Wells Fargo, Bank of America, Citigroup -- these are big banks. Ultimately, they control so much of the banking market that if they are lending less money, then there is fundamentally less money around.

What I don't encounter a lot when I'm on the road is discussions about the politics of whether the president is getting anywhere with the CEOs [of these big banks]. What I could get a lot of is people who are very, very concerned about the fact that the only way that the economy turns around -- with respect to jobs -- is if small businesses employ people.

CNN: Then, what was it that led to the somewhat positive number that came about?

Velshi: We saw an uptick in demand toward the back half of this year. We know the GDP grew so we know that the economy was picking up. That is measured by people buying things, companies buying things and that has caused some companies to actually hire people.

[Companies and businesses] had gotten very, very lean in 2008 and they went through the beginning half of 2009 very lean. But, you only can get so lean. You get as lean as you can get to keep your company going when there's no business but, all of a sudden, when business starts to pick up, there was an opportunity to start to hire people.

But again, it's too early to know whether it's a trend. I wouldn't be surprised if December numbers were actually worse than November numbers. It's very hopeful. It probably indicates we're in the right direction, but, it may be an anomaly.