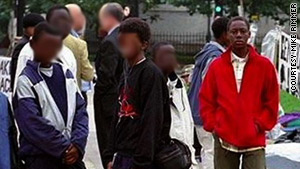 Umar Farouk AbdulMutallab at Buckingham Palace in London while on a field trip.
STORY HIGHLIGHTS

(CNN) -- The man accused of trying to blow up a U.S.-bound airliner on Christmas Day attended an Islamic "Knowledge Fest" in Houston, Texas, in 2008, according to one of the organizers of the event.

Yasir Qadhi, who was an instructor at "Ilm Fest," said the 16-day conference organized by the Al Maghrib Institute was a series of courses and workshops to teach young Muslims "the nuts and bolts of Islam."

Suspect Umar Farouk AbdulMutallab attended some of the classes that Qadhi taught during the event, which ran from August 1 to 17, 2008.

"He was a very quiet individual, tight-lipped and shy, and he did not ask a single question during the discussions," Qadhi said in an exclusive interview with CNN. "He barely interacted with the other students at the conference."

AbdulMutallab was not a visible presence during the conference and did not attend all the sessions, recalled Qadhi.

Qadhi recalls speaking to AbdulMutallab and remembers that he was "very reserved in his responses."

AbdulMutallab also attended two seminars organized by the Al Maghrib Institute in London in the months before the event in Houston, Qadhi said.

One of the events was on the life of the Prophet Mohammed, and the other course was on the first chapter of the Koran.

Qadhi said the institute taught young Muslims a "orthodox Islam for the 21st Century," stressing the importance of the literal text of the Quran but imbuing those words with a modern meaning.

"We are trying to carve out a Western Muslim identity among conservative Muslims -- for Muslims to integrate into Western society but maintain their Islamic identity."

Qadhi, of New Haven, Connecticut, has been involved in de-radicalization efforts in the United States and was a leading participant in the U.S. Counter-Radicalization Strategy conference organized by the National Counterterrorism Center in the summer of 2008.

"It's ironic that he came to us," said Qadhi of AbdulMutallab.

The Al Maghrib Institute has chapters in the United States, Canada and the United Kingdom, and has taught more than 30,000 young Muslims in its courses.

Qadhi says there was no indication AbdulMutallab in 2008 was extreme in his views.

After the Houston event, AbdulMutallab did not sign up for any more Al Maghrib events, said Qadhi -- perhaps a sign he was starting to become influenced by extremist ideas, he added.

"At some level, we did not convince him of the validity of our views," says Qadhi, "and that is cause for regret."

"What AbdulMutallab probably doesn't realize is that by his actions he has hurt the very same people -- Muslims -- who he was purportedly trying to defend."


CNN's Paul Cruickshank and David Mattingly contributed to this report.