(CNN) -- The brutal winter storm that caused havoc from Texas to Maine has paralyzed swaths of Kentucky, where officials are working to cope with what they say is the worst power outage in the state's history. 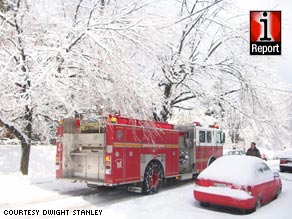 "We are kind of in a state of emergency. It's pretty bad," said iReporter Dwight Stanley of Louisville, Kentucky.

Temperatures that dipped into the teens on Friday are expected to rise to the upper 30s to lower 40s on Saturday, the weather service said.

The emergency reflects the challenges faced in states such as Kentucky, where many rural and remote regions struggle to keep warm and dry under dire weather conditions.

Nine weather-related deaths have been reported, with two confirmed, said the office of Gov. Steve Beshear. A previously confirmed death has since been found to be unrelated to the weather.

The deaths prompted authorities to issue a stern warning about the dangers of carbon monoxide.

"We've lost three citizens because people weren't listening to the fire department when they look into the cameras and talk on the radios and say, 'listen up, carbon monoxide kills,' " Abramson said in a press conference Friday afternoon. "We can't talk enough about it."

The storm caused the largest power outage in Kentucky's history, with more than 607,000 customers out of power.

But Melnykovych said that while the state is saying 607,000 customers have lost power, he thinks the number is closer to 650,000 because the state figure comes only from utilities it regulates.

When Hurricane Ike hit in September, 600,000 customers lost power. Melnykovych said the temperature was around 75 degrees and power outages were more of an "inconvenience than a life-threatening situation." iReport.com: Send your wintry weather photos, videos

"Hurricane Ike didn't have this kind of impact," he said.

Of the state's 120 counties, 78 have declared emergencies. So have 47 cities, the governor's office said.

At least 113 emergency shelters have been opened.

Jewel Tomes, who lives in Leitchfield, took shelter at a high school after a complex for the elderly lost power and was "thrilled to have a place to come to."

"The high school here was generous, and more than 500 people have been sheltered here, and we have had cots and blankets and three meals a day. And we had medication," she said.

Around 93,000 customers on 55 water systems remain without access to water because of outages and storm damage.

Crews across the state were working to clear roads of snow, ice and trees.

A key concern is getting generators to water treatment facilities because of the large number of people without water.

The Kentucky National Guard, which has had 620 soldiers on duty, is bolstering to 1,000 the number of soldiers aiding recovery efforts.

The state said the Federal Emergency Management Agency will operate out of a National Guard center in Frankfort.

Beshear praised the Obama administration's prompt reaction to the storm.

"They really hit the ground running," he said. "They're working very hard to get all the equipment and supplies here that we need."

For a third day, Beshear on Friday visited regions of the state slammed by the storm.

It's the first ice storm for Debbie Pelissero, who moved to Lexington from San Diego in May. She took pictures of the "peaceful and surreal" scenes for her California family.

"I never saw anything like it before. I've never lived in anything like this," she said, watching crews salt the road for the next expected storm.

The newcomer is learning a basic principle about her new Kentucky home, uttered by the governor.

Kentuckians, he said are "a very resilient bunch."

All About Winter Weather • Kentucky